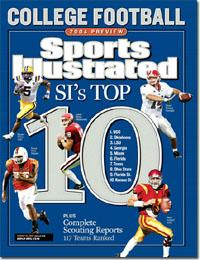 BATON ROUGE — LSU has been tabbed the No. 3 team in America heading into the 2004 season, according to Sports Illustrated in its College Football Preview, which hits the newsstands later this week.

The Tigers, coming off a 13-1 mark and the BCS National Title last year, are ranked behind No. 1 Southern Cal and second-ranked Oklahoma. LSU beat Oklahoma, 21-14, in last year’s Nokia Sugar Bowl to claim the BCS title.

The No. 3 ranking for LSU mirrors that of the ESPN/USA Today Coaches poll, which also had the Tigers ranked behind Southern Cal and Oklahoma when it was released two weeks ago.

Georgia is ranked No. 4 in the SI preseason poll, followed by Miami, Florida, Texas, Ohio State, Florida State and Kansas State. Other Southeastern Conference teams in the top 25 include Tennessee at No. 11 and Auburn at No. 13.

In addition to the national ranking, LSU had four players, two on each side of the football, selected to Sports Illustrated’s 2004 All-America team. Sophomore running back Justin Vincent and senior center Ben Wilkerson were picked for the offensive unit, while senior defensive end Marcus Spears and senior cornerback Corey Webster were on the defensive team.

Furthermore, Vincent, who is coming off an LSU freshman record 1,001 yards rushing in 2003, is listed as the No. 1 dark horse for the Heisman Trophy, according to the magazine.

Sports Illustrated lists LSU game against Georgia in Athens on Oct. 2 one of 10 “must-see” games in all of college football in 2004. Of the LSU-Georgia game, SI states, “the Tigers took two from the Bulldogs last season, and this battle between the hedges could again be a preview of the SEC title game.”

Sports Illustrated also features a four-page spread on LSU titled “The Big Switch.” The feature, written by Kelley King, takes an in-depth look at how LSU coach Nick Saban signs multi-skilled athletes and then puts them in the right positions once they come to Baton Rouge. The story centers around that of sophomore safety LaRon Landry, senior defensive end Marcus Spears and senior cornerback Corey Webster, all of which played offense in high school before making the move to defense at the collegiate level.