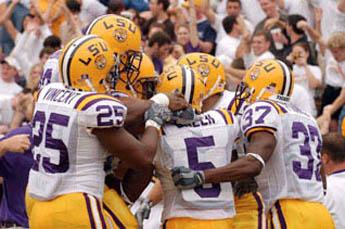 LSU players spent Sunday being issued equipment, getting a physical and then taking two parts of the strength and conditioning test. Saban put the Tigers through a strength test followed by the running of 10 40-yard dashes. LSU will take the final portion of the conditioning test on Monday morning as each member of the squad will run 16 110’s.

LSU is slated to practice for the first time on Monday afternoon with the upperclassmen hitting the field at 3 followed by a 6:30 workout for the freshmen. Monday also calls for academic orientation for the freshmen as well as compliance meeting for the team.

“We are obviously happy to be back in the swing of football and back in camp,” Saban told the media following Sunday’s conditioning test. “We are happy to have our players here and we are looking forward to the challenges that we have.

“I was not particularly pleased with the way we ran our first test, but obviously we will learn more tomorrow. I think we have too many are big guys that probably weigh too much and are overweight, which is not a good combination relative to conditioning having to carry around extra weight. Most of our skill guys for the most part looked pretty good, but I was not as pleased as I was hoping to be in the way we ran.”

Saban said the wide receiver Bennie Brazell did not report due his to participation in the Olympic Games, while sophomore running back Barrington Edwards is no longer part of the team. In addition, signee Jeremy Jones did not pass his physical and will not be in camp.

“Barrington Edwards had university problems here that made it difficult for us to bring him back,” Saban said. “We mutually agreed that it might be better for him to go someplace else.

“Jeremy Jones did not report because he did not pass his physical. He had an ACL (injury) at the end of last season, and we recruited him with the idea that he would be fine by now. We had to make a decision as to whether we wanted to bring a player into fall camp that could not practice, so he’s not here because of injury.”

The Tigers also added a pair of transfers to the squad as defensive back Sammy Joseph, formally of Colorado, and defensive end Chase Pittman, a transfer from Texas, both reported on Sunday. Joseph and Pittman, both sophomores, can practice with the Tigers this year, but will not be able to participate in games until the 2005 season.