Tigers to Report on Sunday 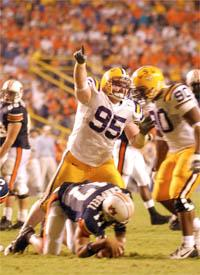 BATON ROUGE — LSU coach Nick Saban will welcome 105 football players to campus on Sunday as the Tigers begin preparations for the 2004 season.

The schedule on Sunday calls for the players to report to campus between 10 a.m. and noon followed by a team meeting at 1:15 p.m. The players will then get a physical, be issued equipment, followed by a series of strength and conditioning tests.

The day is capped off with another team meeting at 7:30 p.m.

The Tigers are coming off a 13-1 mark in 2003 as they won their first national football title since 1958 and captured their second Southeastern Conference championship in the last three years.

Among the 105 players reporting to camp include 13 starters on both sides of the ball, including six on offense and seven on defense. Headlining the lists of offensive starters include senior All-America center Ben Wilkerson, sophomore running back Justin Vincent and preseason All-America tackle Andrew Whitworth.

LSU opens its season on Sept. 4 when the Tigers host Oregon State at 5 p.m. in Tiger Stadium in a nationally televised contest on ESPN.