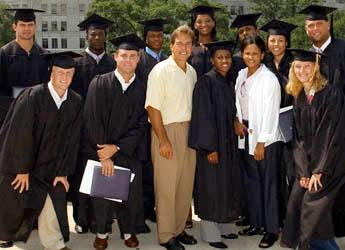 BATON ROUGE — Six members of LSU’s 2003 national championship football team, a pair of players on LSU’s 2004 Final Four women’s basketball team and a two-time Olympian were among the 23 student-athletes who were awarded their degree here Thursday.

Corey Webster, an All-American cornerback for the Tigers, highlighted the list of six Tiger football players who took part in the graduation ceremonies on the LSU campus. Webster, who still has one season of eligibility remaining, currently ranks second in school history with 14 career interceptions. He’ll enroll in graduate school during the fall.

“I had to cram a lot in over the last two semesters. It took a great deal of hard work, but I was able to get in done and know and ready for my senior season of football.”

Since taking over the Tigers in 2000, 57 players who have played under Nick Saban have gone on to earn their degree, including 11 members of the 2003 national championship squad.

Temeka Johnson, an All-America point guard on the LSU women’s basketball team, graduated in four years with a degree in general studies. Johnson, who ranks among the school’s all-time leader in assists and steals, returns for her fourth season as a starter for the Lady Tigers in 2004-05.

Walter Davis, a six-time NCAA Champion in track and field as well as being the school’s record-holder in the triple jump, delayed his trip to Athens, Greece for the Olympics to participate in graduation on Thursday. Davis, who also competed in the 2000 Olympics, will represent the United States in the triple jump later this month in the Olympic Games.