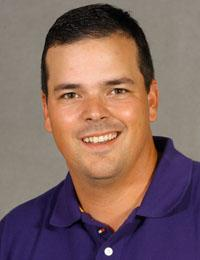 McEntire served the last three years at the Division II level as head coach of St. Edward’s University. Under his guidance, the Hilltoppers advanced to the 2004 NCAA Division II Regional Tournament for the first time in school history.

“Mark has head coaching experience, and he’s a special young man who can do everything I am able to do,” said Jones. “He has a fiery personality, and I believe he brings some fire to our team in how we compete.”

In 2003, McEntire recruited the top-rated freshman class in Division II, which produced the 2004 Heartland Conference Freshman of the Year. He also coached two players who were named honorable mention All-America in 2004.

“Mark is an excellent judge of talent, and I believe with his ties to the University of Texas and coaching at St. Edward’s in Austin, it will benefit our recruiting efforts in the state of Texas,” said Jones.

A four-year letterman at the University of Texas, McEntire served as team captain for the 1999-2000 season. He graduated in 2000 with a degree in sports management.