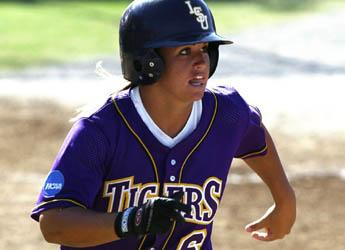 BATON ROUGE — Freshman outfielder Leslie Klein was named a first-team All-American by the Jewish Sports Review, as announced recently by the publication.

A third-team National Fastpitch Coaches Association and second-team Easton All-American this season, Klein earned the honor after ranking in the top 50 in the nation in slugging percentage, RBIs per game and runs per game.

In addition, she was also a second-team All-South Region, first-team All-SEC and All-SEC Freshman team selection, while being named a member of the SEC and NCAA Region 3 All-Tournament teams.

The Jewish Sports Review is a bi-monthly publication that has been recognized as the foremost authority on Jewish athletes in sports. The All-America softball team was comprised of Jewish athletes from NCAA Division I, II and III schools.