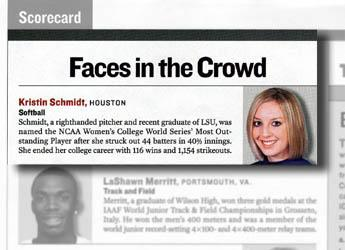 Schmidt, a Houston, Texas, native, was named the 2004 Women’s College World Series Most Outstanding Player, becoming the first player in the tournament’s history to be presented with honor without winning the national championship.

In one of the most memorable performances in WCWS history, Schmidt compiled a 3-2 record over five games started. With a 1.72 earned run average, she allowed 10 runs on just 36 hits with 10 walks while striking out a series best 44 batters. In 40 and two-thirds innings, she threw over 600 pitches and four complete-games before being relived with two outs in the seventh inning of the fifth game, as the entire crowd gave her a standing ovation.

The 2004 political science graduate threw 20 and two-thirds innings on the tournament’s second to last day of action, picking up two complete-game wins before running out of gas late in the third game. Throwing 349 pitches in her three appearances, the senior hurler allowed just two runs on 11 hits with 21 strikeouts before her final outing. In game three, she allowed four runs, all in the fifth inning, on 12 hits, eight of which came in the final three innings, with five walks while striking out four.

For her career, Schmidt finished as one of only 16 players to have recorded both 1,000 career strikeouts and 100 career victories. Her 1,154 strikeouts is tied for 13th all-time in NCAA history, while her 116 wins ties her for ninth all-time. In 2004, she set the LSU record for wins with 38 and ranked third in strikeouts.