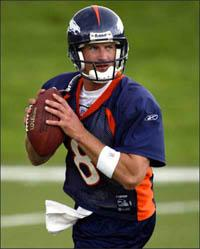 DENVER — Matt Mauck enters the NFL with the distinction of being a higher draft pick in baseball than he was in football.

In 1997, the Chicago Cubs drafted him in the sixth round; in April, the Broncos drafted Mauck in the seventh round.

Less than a week into training camp, Mauck holds a more significant distinction.

When Denver released its first depth chart of the season Monday, Mauck was the most upwardly mobile player on it. Mauck passed quarterbacks Bradlee Van Pelt and Mike Quinn, and is threatening to challenge Danny Kanell for the backup job.

“I pay more attention to the depth chart at the end of camp,” Mauck said between Monday’s practice sessions. “The beginning of camp, I’m not too concerned about. The depth chart is more important for fans to look at. It can always change. I can’t worry about it now.”

Throughout the offseason, Broncos fans worried about who would back up starting quarterback Jake Plummer. Yet one of the primary reasons the Broncos declined to pursue any veterans in the post-June 1 free-agent days was the 6-foot-1, 213-pound Mauck.

At 25, he is the NFL’s oldest rookie. Fortunately for the Broncos, Mauck is showing his age.

“He’s got a nice strong arm, very accurate. On his r?sum?, he’s got pro baseball, a (BCS national) championship, experience in (LSU coach) Nick Saban’s program. He got coached hard, and you can see all that in him this year. Up to now, it’s very exciting. But there is still a long way to go.”

Mauck could be the next great Denver seventh-round pick. Former tight end Shannon Sharpe, current tight end Byron Chamberlain and center Tom Nalen were drafted in that same round.

Like those former and current Broncos, Mauck probably should not have lasted until then. Supposedly wise football minds confirmed as much.

When Mauck was debating whether to leave LSU after his junior season last winter, he consulted with the NFL’s draft advisory board on where he might be selected and was told the fourth round.

Had Mauck asked the Broncos, he might have heard a similar answer.

“We drafted him in the seventh round, but a bunch of us in the organization had him rated higher than that,” Broncos quarterbacks coach Pat McPherson said. “We were pretty happy he was there. And he’s definitely better than we thought he was. He’s a good athlete, strong arm, real smart.”

But then, defensive assistant and special-teams coach Kirk Doll already knew that. Before the Broncos hired him in March, Doll coached the past two seasons at LSU, where he watched Mauck lose two games in two years.

Of all the plays Doll watched Mauck make the past two seasons, the one that stood out had as much to do with the quarterback’s head as his arm. With 1:22 remaining in a tie game between LSU and Georgia in September, Mauck watched Tigers wide receiver Skyler Green break off his pattern and still knew where to deliver the football for a game-winning, 34-yard touchdown strike.

“And he’s doing the same things that he did for us at LSU,” said Doll, LSU’s former assistant head coach. “He’s making good decisions and competing.”

One of Mauck’s better decisions was giving up baseball after being switched from third baseman to catcher. After three seasons in the Cubs organization and reaching Single-A, Mauck surrendered the sport and signed up to play with Saban.

“I found out I wasn’t any good,” Mauck said.

And what has he found out about himself in this summer’s training camp?

While he might be unsure where he stands, others are not.

“For a rookie to come in and handle the system, he’s been impressive,” said Kanell, who could find himself in a battle for the No. 2 job. “He picked it up pretty fast, and he’s shown a lot of poise. That was something that caught everybody’s eye, that he picked up things pretty quick and he handled himself like a pro.

Staff writer Adam Schefter can be reached at 303-820-5450 or aschefter@denverpost.com.