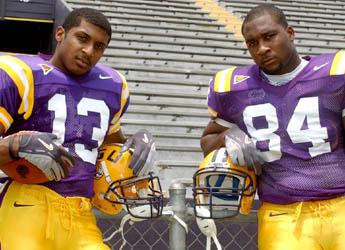 BATON ROUGE — A league-leading nine members of the LSU football team have been named First-Team Pre-Season All-Southeastern Conference by the league’s coaches, the SEC Office announced on Thursday.

The pre-season team marks the first time the coaches from the around the SEC have voted on an all-conference team during the pre-season. The pre-season squad includes a first, second and third team. Each SEC squad had at least two student-athletes on the combined squads. LSU led all schools with 13 players selected. Georgia, Tennessee and Ole Miss each had 10 players selected, with Georgia having six players on the first-team.

Coaches were not permitted to vote for their own players, thus a unanimous selection earns 11 of 12 first-team votes.

Last year, Vincent set and LSU freshman record with 1,001 yards rushing, including an SEC Championship game record of 201 against Georgia. He followed that with 117 yards and a TD in the Tigers’ 21-14 win over in the BCS National Championship game. Green ranked third on the squad last year in both receptions (48), yards (519) and receiving touchdowns (5), which included the game-winner in a 17-10 victory over Georgia in September.

Webster enters the 2004 season ranked second in LSU history with 14 career interceptions after picking off seven passes in 2003. Turner ranked second on the team in 2003 with 78 tackles, while Spears had 13 tackles for losses to go with six sacks for the Tigers.