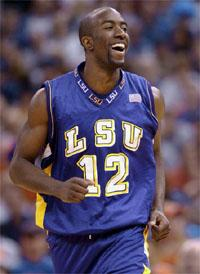 AUBURN HILLS, Mich. — Detroit Pistons President of Basketball Operations Joe Dumars announced today that the club has signed forward Ronald Dupree, a former LSU basketball player, to a multi-year contract. Per team policy, terms of the contract were not disclosed.

“We are excited to add Ronald Dupree to our roster for the upcoming season,” said Dumars. “Ron impressed us with his work ethic and tenacity during training camp last year and we monitored his progress closely with the Bulls during the regular season. He’s another player that fits the Pistons profile and will give us added depth and versatility at the forward position.”

Dupree, a training camp invitee by the Pistons last year, spent the 2003-04 season playing with the Huntsville Flight in the National Basketball Development League and the Chicago Bulls. After playing half the season in Huntsville, Dupree signed the first of two 10-day contracts with Chicago on January 7, 2004. He was signed by the Bulls for the remainder of the season on January 28, 2004. Appearing in 47 of Chicago’s final 48 games, he averaged 6.2 points, 3.6 rebounds, 1.2 assists and 19.0 minutes per game. In eight games as a starter, Dupree averaged 7.0 points, 3.0 rebounds, 1.3 assists, 1.13 steals and 24.0 minutes per game. He led the Bulls in scoring once — a season-high 18-point performance at Miami (1/7) and scored 10-plus points on 11 occasions.

The 6-foot-7 forward participated with the Pistons in the 2003 Pepsi Pro Summer League in Orlando, Florida. In five games, he averaged 10.2 points with 3.4 rebounds and 1.20 steals in 20.2 minutes and finished T-9th in steals per game (1.40 spg). Dupree, 23, concluded his college career ranked eighth in career points (1,726) and sixth in career rebounds (907) at LSU, earning All-SEC Second Team honors each of his last three seasons.