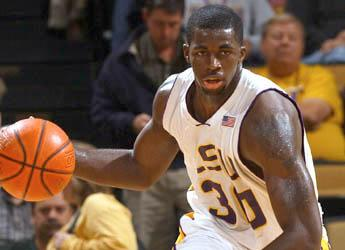 BATON ROUGE — The LSU men’s basketball team was ranked No. 31 Monday by ESPN.com’s Andy Katz in his Summer Sizzling Top 50 announced on the web site.

Of the Tigers, Katz wrote, “WHY: The Tigers could easily vault into the top 20 with the tandem of Brandon Bass and Glen Davis up front. Davis’ arrival takes the pain away from Jaime Lloreda’s departure. Regis Koundjia’s return gives the Tigers three legit stars at their respective positions. The guards of Xavier Whipple and tack Minor continue to improve. This team has quickness, strength and enough youthful exuberance to be a major player in the SEC.

“WHY NOT: There is a lot of expectation on Davis to be an impact player. If he’s not, then Bass might find getting shots a frustrating experience.

“SUMMER BUZZ: Bass was as good as gone to the NBA at one point in June. But he came to his senses once he realized he wasn’t going to be in the first round. He’s a special talent that still needs another year or two to find his game.”

Wake Forest is the choice as the No. 1 team in Katz’ poll ahead of North Carolina, Kansas, Georgia Tech and Syracuse.

From the Southeastern Conference, Mississippi State is 11, Kentucky 12, Alabama 20 and Florida 24. After LSU at 31 comes Vanderbilt at 34, Tennessee at 40 and Arkansas 46.