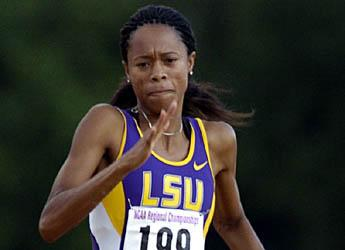 SACRAMENTO, Calif. — Muna Lee became the fifth athlete with LSU ties to qualify for the 2004 Summer Games as part of Team USA, finishing second in the women’s 200 meter final Sunday at the U.S. Olympic Track and Field Trials.

Lee, who completed her eligibility with the Lady Tigers in June, turned in the best performance of her career, clocking a personal record of 22.36, to earn the trip to Athens.

Stephanie Durst, a former teammate of Lee’s while at LSU, also made the final but missed out on an Olympic bid after placing eighth overall with a time of 22.99.

Also in action was former Lady Tiger hurdler Lolo Jones. Jones advanced to the semifinals of the 100-meter hurdles, but fell two spots shy of a berth to the final, placing 10th overall with a time of 12.93.

The 2004 Olympic Games will get underway Aug. 13, with the track and field portion of the competition running, Aug. 18-29.