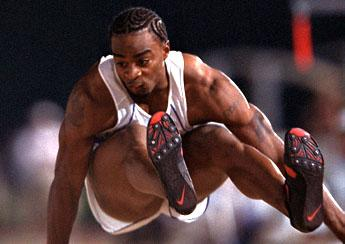 Davis, who is currently ranked 11th in the world in the event, jumped a season-best 57-10 1/4 on his final jump of the day to become the fourth athlete with LSU ties to make the U.S. squad.

Athens will mark Davis’ second straight Olympic appearance as he also a member of Team USA at the 2000 Summer Games in Sydney where he finished 11th in the triple jump.

On the track, Stephanie Durst and Muna Lee, who both completed their eligibility with the Lady Tigers in June, each advanced to the finals of the women’s 200 meters.

Durst finished second in her heat to earn an automatic bid to the final round. Her time of 22.66 was fourth-fastest qualifying mark of the day.

Lee also automatically advanced placing second in her heat with a time of 22.85, the eight-best mark of the afternoon.

Fellow former Lady Tiger Monique Hall also competed in the semifinals of the 200, but failed to move on finishing 12th with a time of 23.44.

In the 100-meter hurdles, Lolo Jones, who also completed her eligibility in June, made it through the qualifying round of competition. She placed third in heat and ninth overall (12.95) to advance to Sunday’s semifinals.

Action from the 2004 Olympic Trials will wrap up tomorrow. Competition is set to begin at 9 a.m. (CT).