Saban and Webster Named to 50 Most Relevant People List 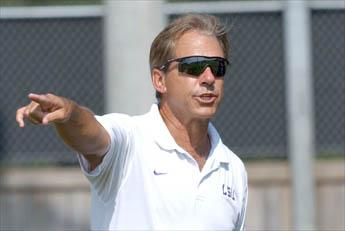 BATON ROUGE — LSU coach Nick Saban and cornerback Corey Webster have been named to a list that includes “The 50 Most Relevant People in College Football” according to Dennis Dodd and CBSsportsline.com.

The list was introduced on CBSsportsline.com last week. According to Dodd, “this isn’t necessarily about who is most popular or most powerful. It’s the 50 people that will have the biggest impact on the 2004 season.”

Saban, who has guided the Tigers to two out of the last three Southeastern Conference titles along with the 2003 BCS National Championship, is listed No. 13 on the list. Webster, a returning All-America at cornerback for the Tigers, came in at No. 34 on the list.

Of Saban, Dodd writes, “LSU gave him the talent and budget he needed to build a powerhouse. He won two of the past three SEC titles and half a national championship with a simple formula: Play rabid defense and land the best players in Louisiana. The excellence is not going to stop anytime soon. Friends say Saban has never looked so content. …As long as Saban is around, LSU will be a factor in the SEC and nationally.”

When describing Webster, Dodd states, “(He’s) Deion Sanders without the flash. The steady, shut-down corner is a big reason LSU was able to share the national championship. He locked up on Oklahoma’s Mark Clayton in the Sugar Bowl, arguably providing the difference in a 21-14 victory. Going into this season, he is the best corner in the country. The 2003 All-American needs eight interceptions (he has 14) to set the school career record. Webster was NFL-ready as a junior but chose to return, which is bad news for the rest of the SEC — and the country.”

CBSsportsline.com will reveal the person selected No. 1 on the list on Monday.