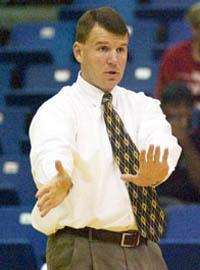 Bere, who returns to the Southeastern Conference after a two-year absence, replaces Josh Ivans who left the volleyball program in June to become the head coach at Barton County Community College in Great Bend, Kan.

The head coach at the University of Southern Indiana for two seasons, Bere led the Screaming Eagles to one Great Lakes Valley Conference Tournament title and to within three points of a second consecutive championship and bid to the NCAA Division II Tournament.

“I think we are very fortunate to bring in a person with head coaching experience,” said Flory. “Craig is an outstanding person and an outstanding coach. I think he will bring balance and perspective to our staff.”

Bere guided setter Kim Boehmer to honorable mention All-America honors, the first player in USI history to earn the honor, after she was named to the 2002 and 2003 All-GLVC first team. Kristi Kavanaugh was also named a CoSIDA first-team Academic All-American under his helm.

In 2002, Bere led the Screaming Eagles earned their first bid in the NCAA Division II Tournament and first tournament win after winning the GLVC Tournament crown. Despite just two seasons at Southern Indiana, he was the third winningest head coach in the program’s 24-year history, posting a 47-17 (.734) record.

Prior to taking the job at USI, Bere was an assistant coach at Mississippi State University from 1997-2002. He served as the coordinator of the Bulldog defense and worked closely with MSU’s outside hitters on the court. Bere coordinated MSU’s recruiting efforts and handled additional administrative duties off the court.

A native of Louisville, Kentucky, Bere was a standout four-sport letterman at Doss High School, competing in football, basketball, baseball, and soccer. He attended Morehead State University, where he was a three-year letterwinner on the Eagle football team and became a member of the men’s volleyball club team, leading to his career as a volleyball coach.

He joined Morehead’s varsity women’s volleyball coaching staff in 1993 as a student assistant. He was appointed to a full-time assistant coach’s position in 1994, first as an undergraduate and then as a graduate student.

A member of the American Volleyball Coaches Association, Bere has served as a camp instructor in summer volleyball camps in Alabama, Indiana, Kentucky, Louisiana, and Michigan. He earned a bachelor’s degree in health in 1995 from Morehead State before receiving his master’s degree in health, physical education, and recreation in 1997. His wife’s name is Shannon.