Willie Advances to Finals in 400 Meters 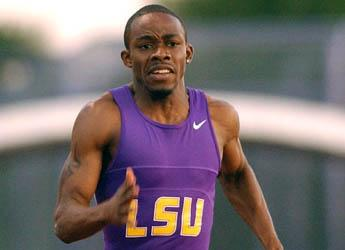 SACRAMENTO, Calif. — LSU sophomore Kelly Willie advanced to the finals of the 400 meters Monday at the U.S. Olympic Track and Field Trials, finishing third overall in the semifinal round at the Alex G. Spanos Sports Complex.

Willie, the 2004 NCAA runner-up in the event, turned in his second straight sub-45 second performance of the Trials, clocking 44.89 to place second in his heat and earn the automatic bid to Thursday’s final.

Willie was bettered only by former Tiger great Derrick Brew in his heat. Brew, who lettered for the Tigers in 1999 and 2000, clocked 44.75 to advance with the field’s fastest qualifying mark.

In the women’s 400 meters, former Lady Tiger Monique Hall missed advancing to the semifinals by just one spot. The seven-time All-American placed fifth in her heat and 17th overall with a time of 52.71.

Lady tiger sophomore Brittany Henry also missed advancing to the finals. The Spokane, Wash., native placed 15th in the prelims of the hammer throw with a toss of 201-9.

The Olympic Trials will break for two days before resuming Thursday at 4 p.m. (CT) with the qualifying rounds of the men’s javelin.