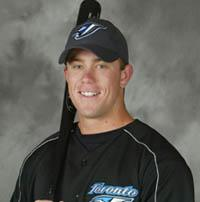 HOUSTON — Four days ago, Aaron Hill wasn’t even ticketed to play in the All-Star Futures Game at Minute Maid Park. But Russ Adams, also a shortstop in the Toronto Blue Jays organization, suffered a rib-cage injury and Hill replaced him on the USA team roster.

And Sunday, Hill was the unassuming Most Valuable Player of the USA’s 4-3 victory over the World team that ended with the tying run on third base.

“They told me four or five days ago that I was going to the Futures Game in like two days,” said Hill, who’s an All-Star for the Double-A New Hampshire Fisher Cats in the Eastern League. “There were no complaints, no questions asked. Obviously I wasn’t even in the media guide. But that was no big deal. I got to play in Minute Maid Park.”

Hill came in as a defensive replacement at the start of the fourth inning and in the fifth he doubled home what proved to be the winning runs in his only plate appearance. USA team led, 4-0, heading into the seventh and final inning and when the World came back with a three-spot, the two-run double proved to be decisive.

Still, Hill was floored when he was called out on to the field after the game to accept the award. And now the bat he used to strike the big double is on its way to Cooperstown, N.Y., to be displayed prominently in the National Baseball Hall of Fame along with an artifact from each of the last five Futures Game MVPs.

“It still hasn’t sunk in yet,” he said. “I had to put the trophy in my locker. If I carried it around I would’ve dropped it.”

Hill, though, is no stranger to the spotlight.

Playing for Louisiana State University in 2003, he was Player of the Year in the Southeastern Conference. Then Toronto used its top pick to select him 13th overall in the June 2003 First-Year Player Draft.

Asked for his assessment of his first-half performance, Hill, 22 years old and a native of Visalia, Calif., said: “I really haven’t been doing much of anything.”

It’s been enough to place him on the Northern Division roster in Wednesday’s Eastern League All-Star Game at Prince George’s Stadium in Bowie, Md.

Adams, who had been picked to play in the Futures Game before the rib-cage injury, is a level ahead of Hill and plays for the Triple-A Syracuse SkyChiefs in the International League. The two became friendly this past Spring Training, where they built a healthy competition.

“I met him in the Cape Cod League in the All-Star [Game] over there,” Hill said. “And then just in Spring Training we got along pretty well. He’s a really good guy. But if they want to move me up quicker because of a game-winning double, that’s fine with me.”

Aside from the stellar afternoon, Hill will also savor his brush with Hall of Famer Ozzie Smith, who chatted it up with the U.S. team during batting practice. Hill said he was in awe just standing on the same field as Smith, a 13-time Gold Glove shortstop.

“He’s an All-Star and a Hall of Famer and a guy you just look up to,” Hill said. “He comes running out there and then I’ve got to try and field ground balls? You’ve got to be kidding me.”

Two hours later, the game had culminated with an honor that was beyond Hill’s wildest dreams.

“It’s an unforgettable experience, that’s for sure,” Hill said.