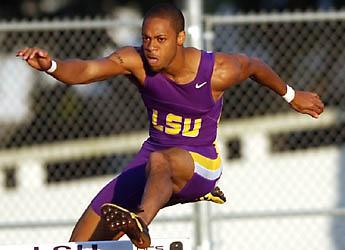 Brazell, a junior out of Houston, Texas, advanced by virtue of a third-place finish in the 400-meter hurdles. The 10-time All-American was outstanding in clocking a personal best and school record time of 48.05 to finish behind national champion James Carter (47.68) and runner-up Angelo Taylor (48.03).

The record marked the second for Brazell in two days as he first broke his own record of 48.80, set as a freshman in 2002, Saturday in the semifinals with a time of 48.52.

Brazell is just the third Tiger in school history to ever qualify for the Olympics in the 400 hurdles as the father-son duo of Glen “Slats” Hardin (1932 and 1936) and Billy Hardin (1964) were the first to do so.

Moffitt, who finished up his eligibility with the Tigers in June, advanced to Athens after placing third in the long jump competition. The Winnsboro, La., native jumped 26-5 ? on his sixth and final jump of the day to earn the Olympic bid.

Dwight Phillips won the national title in the event, jumping 27-2 on his first attempt, while Tony Allmond placed second with a distance of 26-7.

2000 Olympian and former LSU great Walter Davis, just missed an automatic bid in the long jump, finishing fourth overall with a leap of 25-11 1/2. Having already met the Olympic “A” standard in the event, Davis could still possibly make the team as Allmond has yet to reach the standard. Allmond has until August 9 to meet the standard of 26-10 1/2. If he fails to do so, Davis will replace him on the Olympic team.

In qualifying round action, sophomore Kelly Willie turned in a sensational performance in the men’s 400 meters. The Houston native broke the 45-second barrier for just the third time in his career, clocking a personal record of 44.63 to not only win his heat, but advance with the field’s fastest qualifying mark.

Former Tiger Derrick Brew also advanced to Monday’s semifinal round, placing second in his heat, and ninth overall, with a time of 45.49.

In Saturday’s action, LSU great Muna Lee missed the cut in the women’s 100 meters, finishing sixth in the finals with a time of 11.17. Lee could still make the trip to Athens as part of the 4×100-meter relay pool. The final decision on the six athletes that will represent the United States as part of the short relay squad will be announced August 9.

Competition from the U.S. Track and Field Olympic Trials will continue tomorrow at 4:30 p.m. (CT).