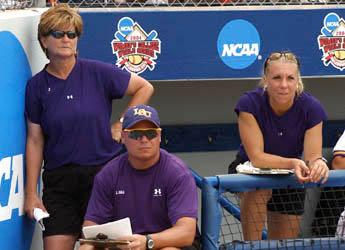 BATON ROUGE — After leading LSU to within one game of the Women’s College World Series championship game, head coach Yvette Girouard, associate coach James DeFeo and assistant coach Lori Osterberg were selected as the 2004 Speedline/NFCA Division I South Region Coaching Staff of the Year, as announced by the National Fastpitch Coaches Association on Thursday.

In her fourth season with the Tigers, Girouard and her staff guided LSU to a 57-12 overall record and its second WCWS appearance in four years. The Tigers swept the Southeastern Conference titles, winning the Western Division, regular season and tournament championships for the third time in four years.

LSU went undefeated in NCAA Region 3 in Waco, Texas, to advance to the Women’s College World Series. The Tigers then became the first school east of the Mississippi River to come within one game of the national championship game since 1984. LSU finished the season ranked third in the nation, its highest outright ranking in school history.

“It was an unbelievable season for LSU softball this year,” said Girouard. “This is always a fulfilling award because it is voted on by our peers. I definitely think I work with the best coaching staff in the country and the three of us will continue to reach for bigger goals.”

DeFeo completed his fourth season at LSU and fifth for Girouard, where he is primarily responsible for leading the Tiger hitting to the eighth best batting average in the nation last season. He was promoted to associate coach this summer. Osterberg returned to the Tiger coaching staff in 2004 after a two-year absence and once again made an immediate impact, working with the LSU infield and hitters.

Girouard’s career record now stands at 981-302 (.765) over 24 years of coaching. She is poised to become just the fourth coach in NCAA Division I history to record 1,000 career wins next season. She currently ranks as the fifth winningest coach in NCAA Division I history, and has posted 23 consecutive winning seasons with five WCWS appearances and 14 NCAA Regional appearances.