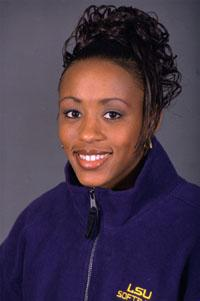 BATON ROUGE — Former LSU softball All-American Trena Peel was one of 28 players named to the National Pro Fastpitch All-Star teams, which will compete in a two-game series in Oklahoma City, Okla., on July 13 and 14.

Peel is a starter in the Akron Racer outfield, batting .254 on the season with a double, two triples and a home run. In addition, she has knocked in a team-best 12 runs and is tied for the team lead with 10 stolen bases.

From 1999-2002, Peel was a starter in the LSU outfield. She led the nation in triples her senior season while being named a National Fastpitch Coaches Association second-team All-American and an Easton first-team All-American. She was also the inaugural Southeastern Conference Athlete of the Year in 2002.

The 2004 All-Star series will feature two teams comprised of NPF’s top players fighting for geographical bragging rights and midseason supremacy. Judy Martino of the Akron Racers will coach the East All-Stars, while the West team will be led by Texas Thunder head coach Wayne Daigle.

In addition to the NPF All-Star series, the two all-star teams will take on the USA National Team in a doubleheader on July 13. The first game is scheduled to begin at 5 p.m.