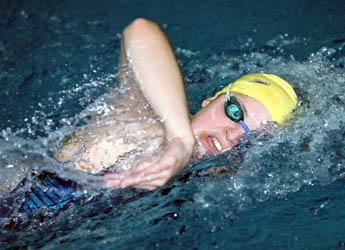 The top two competitors in each event will qualify for a spot on the 52-person Olympic squad that will compete in Athens next month. The eight-day event will consist of two sessions, a morning round which will begin at 9 a.m. and an evening round slated for 4:45 p.m.

Marrs, a former five-time All-American, will compete in the 100-meter and 200-meter breaststroke events for Maryland’s Curl-Burke Swim Club. The school-record holder in the 200-yard individual medley, Marrs is seeded fourth out of 28 swimmers in the 100 breaststroke and will carry the No. 8 position in the 200 breaststroke.

It will be Marrs’ second appearance at the Olympic Trials as the Baton Rouge native placed fifth in the 100 breaststroke, just shy of qualifying for the 2000 Sydney Games.

Between 1994-98, Marrs posted three times on LSU’s all-time top performances list and captured a bronze medal in the 100 breaststroke at the Pan Pacific Championships in Fukuoka, Japan.

Smith, a native of Metairie, will compete for Bengal Tiger Aquatic Club in the 400-meter freestyle on Thursday morning. She is seeded 46th out of 61 swimmers in the event.

“It is such a huge accomplishment for her to qualify, as it is for any swimmer,” said BTAC head coach John Roy. “The obstacles she has had to overcome to get to this point really makes this a special moment for her.”

The 23-year-old Smith finished her eligibility this past spring and will graduate this summer with a degree in kinesiology.

Smith left LSU as one of the most decorated swimmers in school history. A 2002 Honorable Mention All-American, she currently holds three school records and recently competed at the NCAA Championships for the third time in her career.

Smith enrolled at LSU in the fall of 1999 but was sidelined by a neck injury she suffered her senior year at John Curtis High School. After redshirting and rehabilitating her injury for two years, Smith returned to the water in the fall of 2001 as a sophomore.

The injury looked to have no effects on Smith as she swam a breakout season and quickly established herself as one of the top distance swimmers in the Southeastern Conference. Her efforts in the 1650-yard freestyle at the 2002 NCAA Championships earned her All-American honors with a 13th-place finish at a then, school-record time of 16:25.47.

That record mark would soon be shattered — as would two more school-record times — one season later.

As a junior, Smith delivered a memorable performance at the 2002 Nike Cup Invitational. Three school records fell, including two of her own as she became one of only three LSU swimmers to own at least two records in more than one event.

Then, in the fall of 2003, Smith’s neck injury was reaggravated, and she was forced to sit out most of the fall season. She rejoined the team and was able to qualify for the NCAA Championships for the third consecutive year.

“Injuries to distance swimmers typically have more of an effect than injuries to sprint swimmers, so qualifying for the Olympic Trials says a lot about what she has done to overcome that,” said Roy.

She overcame the setback to qualify for the 400-meter freestyle last Saturday with a time of 4:18.49, nearly a second better than the qualifying standard.

“She was disappointed she missed out in the 800 free, but we had to get her to believe she could make the 400 and she did,” said Roy. “That just tells you the attitude and character Stephanie has and what type of person she is. She makes us all proud.”