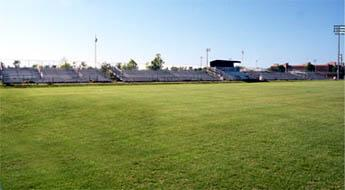 BATON ROUGE — LSU’s 2004 soccer season schedule was made official on Tuesday, it was announced by LSU co-head coach George Fotopoulos.

The Tigers, coming off a 10-9-1 season in 2003, will face nine teams that participated in last season’s NCAA Tournament. LSU will play 20 matches, 11 at home and nine on the road. The Tigers, who have posted a winning record in three of the last four seasons, will play 11 Southeastern Conference matches. Fotopoulos, and his wife Danielle will serve as co-head coaches next season and will be assisted by Ricky Zambrano.

“This is, without question, the most difficult schedule in LSU soccer history,” said Fotopoulos. “We are playing nine teams that went to the 2003 NCAA Tournament, and we have been building our roots for five years and now it is time to see if we can compete nationally.”

LSU will open the season on Aug. 27 against in-state rival Southeastern Louisiana at the LSU Soccer Complex in Baton Rouge. The Tigers then take on Nicholls State, Tulane, and Stephen F. Austin in succession before facing both Ohio State and Dayton in the Buckeye Classic Sept. 10-12 in Columbus, Ohio. LSU will also participate in the Colorado Classic in Boulder, Colo., squaring off with Colorado on Sept. 17 and then Wyoming on Sept. 19.

The Tigers begin conference play on Sept. 24 with a home match versus Kentucky. LSU will be on the road for four matches from Oct. 1-10, as they face Ole Miss, Mississippi State, Georgia, and Tennessee. LSU will also welcome Alabama, Auburn, Florida, and Arkansas to the LSU Soccer Complex, and will travel to South Carolina on Oct. 24 for the final road match. LSU wraps up the regular season on Halloween with a cross-town matchup with rival Southern at the LSU Soccer Complex.

The 2004 SEC Tournament will be held Nov. 3-7 in Orange Beach, Ala., and will feature the top eight teams in the league. The NCAA Tournament begins on Nov. 12 and will be held at various campus sites across the country.

The Tigers will put their 18-1-2 record versus in-state competition on the line when they open up with Southeastern Louisiana at 7 p.m. on Aug. 27 in Baton Rouge. LSU owns a 4-1 all-time mark versus the Lions and defeated them 2-1 last season in Hammond, La.