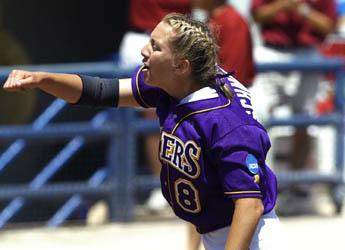 BATON ROUGE — For the first time in the history of the NCAA Women’s College World Series, a player not participating in the championship game was named the tournament’s Most Outstanding Player as the honor was presented to LSU pitcher Kristin Schmidt on Monday night.

Since the Most Outstanding Player awards was instated in 1995, the honor had never been presented to a player not on the winning team. In addition, right fielder Camille Harris was named to the 12-member WCWS All-Tournament Team, joining Britni Sneed and Julie Wiese in 2001 as LSU’s all-time selections to the All-Tournament team.

LSU became the first school east of the Mississippi River to come within one game of the National Championship game since 1984 when Northwestern lost to Texas A&M in the semifinals. No team east of the Mississippi River has ever advanced to the National Championship game in the WCWS’s 23-year history and the Tigers are the only school to force an “if necessary” game since the tournament went to its current format in 1994.

In one of the most memorable performances in Women’s College World Series history, Schmidt completed the WCWS with a 3-2 record over five games started. With a 1.72 earned run average, she allowed 10 runs on just 36 hits with 10 walks while striking out a series best 44 batters. In 40 and two-thirds innings, she threw over 600 pitches and four complete-games before being relived with two outs in the seventh inning of the fifth game, as the entire crowd gave her a standing ovation.

A three-time All-American, she threw 20 and two-thirds innings on Sunday, picking up two wins before running out of gas late in the third game. Throwing 349 pitches in her three appearances, the senior hurler allowed just two runs on 11 hits with 21 strikeouts before her final outing. In game three, she allowed four runs, all in the fifth inning, on 12 hits, eight of which came in the final three innings, with five walks while striking out four.

For her career, Schmidt finished as one of only 16 players to have recorded both 1,000 career strikeouts and 100 career victories. Her 1,154 strikeouts is tied for 13th all-time in NCAA history, while her 116 wins ties her for ninth all-time. This season she set the school record for wins with 38 and ranked third in strikeouts.

Harris ranked second on the team in batting average in the WCWS, hitting at a .313 clip in the Tigers’ five games. The sophomore recorded five hits, including a double, with two RBIs, two walks and three stolen bases. She had a four-game hitting streak in the World Series snapped in the Tigers’ final game.

Against California in the LSU’s fourth game, she knocked in two of the Tigers’ four runs on a two-run double in the third inning that gave LSU the lead for good. In addition, she made a home run-saving catch in the bottom of the third that helped prevent a Cal rally and forced the “if necessary” game.