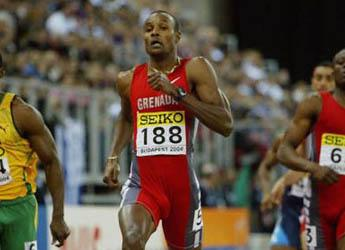 The crowd of thousands was on its feet as their hero entered the home straight, and it erupted as the 27-year-old crossed the line ahead of the Bahamian. According to Alleyne, “I love my Grenadian people, and I wanted to run a 44, so they could see what a 44 looks like.” The previous stadium and games records were 45.27 and 45.70, set by Francique in 2003 and 2001, respectively.

Less heralded, but perhaps more impressive on the day, was Randy Lewis. Another hometown boy, Randy won the men’s Triple Jump with the fifth-best legal effort in the world this year. Hopping, stepping and jumping his way to 17.34m, Randy obliterated his former national record, as well as the games and stadium records. Far behind was Antigua-Barbuda’s teenager, Ayata Joseph, with a 15.89m best performance.

Levern Spencer continued her love affair with the Grenada National Stadium. The 20-year-old St. Lucian set three records to win the women’s High Jump. She broke the six-year-old games mark of 1.83m, and her own stadium record from March of last year, 1.86m, which also happened to be her previous personal, national, and Organisation of Eastern Caribbean States record. Her clearance of 1.88m on Saturday bettered former games record holder, Jamaican veteran Karen Beautle, for whom 1.82m was her best height.