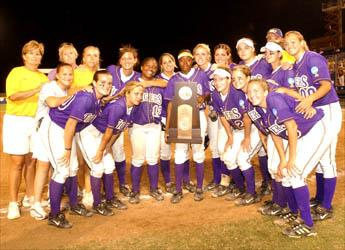 OKLAHOMA CITY — After fighting off elimination twice and playing in their third game of the day, the third-seeded LSU softball team came up seven outs short of advancing to the National Championship game for the first time in the program’s history, falling to California, 4-1, in the Women’s College World Series semifinals on Sunday night at ASA Hall of Fame Stadium.

After defeating Florida State, 2-1, and California, 4-1, earlier in the day, the Tigers were leading 1-0 in the top of the fifth inning when the Bears scored four unanswered runs to take the win. California advanced to take on UCLA in the title game in a rematch of the 2003 National Championship game on Monday at 7 p.m.

“What more could you ask for from your team,” said LSU head coach Yvette Girouard. “We might have made World Series history having to play three games in one day. I told the team before we got off the bus this morning that we weren’t leaving the park until they turned out the lights on us tonight and we are doing just that. Unfortunately we came up just a little short.

“This team did everything my staff asked of them. They played with total heart. Kristin Schmidt pitched her heart out and this team never died. If I have ever coached a team that deserved to go to the national championship game, then it is certainly this group of girls.”

LSU concluded its best season in school history at 57-12 overall after winning the Southeastern Conference title and the SEC Tournament title and advancing to the Women’s College World Series for the second time. With the Tigers forcing the “if necessary” game on Sunday, it marked just the seventh time that an “if necessary” game had to be played since the WCWS went to its current format.

In one of the most memorable performances in Women’s College World Series history, Kristin Schmidt threw 20 and two-thirds innings on Sunday, picking up two wins before running out of gas late in the third game. Throwing 349 pitches in her three appearances, the senior hurler allowed just two runs on 11 hits with 21 strikeouts before her final outing. In game three, she allowed four runs, all in the fifth inning, on 12 hits, eight of which came in the final three innings, with five walks while striking out four.

“In the third game I had to dig deep and give it whatever I had,” said Schmidt. “Our whole team left it all out on the field and we have no regrets.”

The NCAA Region 3 Tournament and SEC Tournament Most Valuable Player completed the WCWS with a 3-2 record over five games started. With a 1.72 earned run average, she allowed 10 runs on just 36 hits with 10 walks while striking out a series best 44 batters. In 40 and two-thirds innings, she threw over 600 pitches and four complete-games before being relived with two outs in the seventh inning of the fifth game, as the entire crowd gave her a standing ovation.

“Softball is an enlightened community and it was great that the crowd recognized Kristin’s effort like that,” said Girouard. “I give kudos to our sport because Kristin certainly deserved that.”

For her career, the three-time All-American finished as one of only 14 players to have recorded both 1,000 career strikeouts and 100 career victories. Her 1,154 strikeouts ranks 13th all-time in NCAA history, while her 116 wins ties her for ninth all-time. This season she set the school record for wins with 38 and ranked third in strikeouts.

LaDonia Hughes led the Tigers from the plate for the series with a .389 batting average. The senior All-American recorded seven hits, including two doubles, with two runs scored and a walk. Sophomore Camille Harris also hit over .300 for the series, swinging at a .313 clip. The outfielder recorded five hits, including a double, with two RBIs, two walks and three stolen bases.

After defeating California 4-1 in their second game of the day, the Tigers forced a rematch with the Bears for the right to move on to the National Championship game. LSU took the early lead in the bottom of the second inning as Sara Fitzgerald doubled in Lauren Uhle. LSU had been 45-0 this season entering the game when scoring first, but a disasterous fifth inning proved the downfall of the Tigers.

With two outs, Schmidt gave up an infield single on a controversial call, as the ball appeared to hit the batter as she left the box. After that, California recorded another hit, got back-to-back walks and a pair of singles to push across four runs. LSU tried, but could not answer back as Bear pitcher Kelly Anderson held the Tiger bats in check the rest of the way.

“There are a lot of “ifs, ands and buts” because we were nine outs away,” said Girouard. “We tried everything we could, but we could not get it done. A break here or there and it changes everything. We were not picked to win anything in the SEC and we came within an eyelash of the National Championship game.”

The Tigers got off to a quick start in the game, but could not get a run across. Lauren Castle singled up the middle. She was sacrificed to second by LaDonia Hughes. After a walk was issued to Camille Harris, Leslie Klein singled up the middle, but Castle was thrown out trying to score from home.

LSU broke through in the bottom of the second inning. Leigh Ann Danos drew a leadoff walk and was pinch run for by Uhle. On a sacrifice bunt by Lauren Delahoussaye, Uhle moved to second. A passed ball sent her to third before she scored on a double to left center by Fitzgerald to put the Tigers ahead 1-0.

Cal loaded the bases with one out in the top of the third. Roni Rodrigues led off with a walk. She was sacrificed to second before Schmidt walked Vicky Galindo. A single up the middle by Lindsay James loaded them up. Schmidt then struck out Jessica Pamanian before Chelsea Spencer grounded out to leave three runners on base.

In the top of the fifth, the Bears came back to take the 4-1 lead. With two outs, back-to-back singles by James and Haley Woods put runners on first and third. A walk to Kaleo Eldredge loaded the bases before Schmidt walked Pamanian to tie the game. Spencer and Alex Sutton then singled to score two more before Spencer was thrown out trying to take third on Sutton’s single.

The Tigers got out of a bases loaded situation again in the sixth inning. In the seventh with two on and two out, Schmidt was replaced by Turner, who struck out the only batter she faced.

After recording four hits in the first three innings, LSU could not manage a hit off of Anderson the rest of the way. In the win, she allowed one run on four hits with three walks and four strikeouts.

In their first meeting of the day, California took the early lead in the bottom of the first inning. Back-to-back singles by Galindo and James put runners on first and second. On a sacrifice bunt attempt, Woods was thrown out by Danos at first, before Fitzgerald gunned down Galindo trying to score from second. With James on third, Eldredge singled to left field to score the first run of the game.

The Tiger s wasted no time in answering back. Klein led off the bottom of the second with a home run to right center field. The 14th home run of the season, she set a new LSU single-season record and tied the game at one each.

In the top of the third, the Tigers added a pair of runs. With two outs, Castle singled to left center. An infield single by Hughes sent Castle to second. Harris then doubled to left center, scoring Castle and Hughes to give LSU the 3-1 advantage.

In the bottom half of the inning, it was Harris again coming up big for the Tigers, this time with her glove. With one out, she robbed a home run from Galindo as she careened into the wall and held onto the ball for the second out of the inning.

The Tigers tacked on another run in the top of the sixth. With one out, Stephanie Hill reached on a fielding error by the shortstop. Delahoussaye then doubled to right center with two outs, scoring Hill from second to extend the lead to 4-1.

Kristina Thorson took the loss for California, falling to 28-4 on the season. She allowed three runs on four hits with a strikeout in two and two-thirds innings. Anderson came on in relief in the third. She allowed one unearned run on three hits with three strikeouts in three and a third innings.