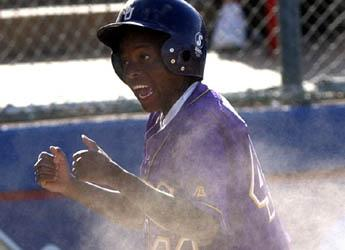 BATON ROUGE — All-American LaDonia Hughes was named the Louisiana Hitter of the Year as nine Tigers were named to the All-Louisiana first and second teams, as announced by the Louisiana Sports Writers Association on Sunday.

A three-time All-American, Schmidt earned the third All-Louisiana honor of her career. In addition, she was a second-team All-South Region and first-team All-SEC selection this season. The NCAA Region 3 Tournament and SEC Tournament Most Valuable Player, Schmidt was a top 25 finalist for USA Softball Collegiate Player of the Year.

A second-team All-South Region selection, Hill was a unanimous first-team selection, the first All-Louisiana of her career. Earlier this season she earned the first Louisiana Hitter of the Week honors of the year on March 2. The 2004 Purple & Gold Challenge Most Valuable Player, she was also named to the prestigious NFCA Leadoff Classic All-Tournament team.

The sophomore walk-on ranks in the top 10 in the SEC in batting average, slugging percentage, on base percentage, hits, RBIs, home runs, total bases and double plays turned. The LSU single-season record holder for home runs, she tied the single-game home run record with two against Nicholls State. She also tied the single-game RBI record against Nicholls and ranks in the top 30 in the nation this season in RBIs per game.

Lauren Delahoussaye was also a unanimous selection to the All-Louisiana team, the first of her career. Earlier this year, she was named the Louisiana Hitter of the Week on March 30. In addition, she earned first-team All-South Region and second-team All-SEC honors this season.

The sophomore ranks in the top 10 in the SEC in runs scored, RBIs, home runs, total bases, sacrifice flies and double plays turned. This season she has recorded 16 multiple-hit and 11 multiple-RBI games, including three, three-RBI games. In a crucial three-game series at top 10-ranked Alabama, she recorded a pair of home runs and was intentionally walked twice.

The senior ranks in the top 10 in the SEC in walks and assists and is fifth in fielding percentage by a third baseman. The LSU career record holder in home runs and walks, Wiese ranks in the top 10 in SEC history in both categories. Against Texas-San Antonio this season, she tied the school record for single-game home runs, while recording a career-best six RBIs. A third-team All-American, Klein was also named a second-team All-South Region, first-team All-SEC and All-SEC Freshman team selection. In addition, she was a member of the SEC and NCAA Region 3 All-Tournament teams.

The Sunrise, Fla., native, ranks in the top 20 in the NCAA in RBIs per game this season and broke the LSU single-season home run record with her 13th round tripper of the year. In addition, she tied the school record with a 15-game hitting streak and tied the SEC single-game record with seven RBIs against Alcorn State.

This season, Castle leads the team in batting average and ranks in the top 10 in the SEC. She also ranks in the top 10 in the league in on base percentage, runs scored and hits. Against nationally ranked South Carolina, she hit a walk-off RBI single in the 10th inning and also knocked in the game-winning runs in a win over nationally ranked Florida.

A first-team All-Louisiana selection as a utility player in 2002, Danos earned second-team honors this season behind the plate. Earlier this season, she also earned Louisiana Hitter of the Week honors on March 9. In addition, she was a second-team All-SEC selection.

Danos leads the team and ranks in the top 10 in the SEC in on base percentage. She has also stepped up her effort defensively, having caught 13 players attempting to steal and picked off three. Against nationally ranked Tennessee, she knocked in the game-winning run on the road.

A first-team All-Louisiana selection last season, Harris earned second-team honors this year. Earlier this season she was named the Louisiana Hitter of the Week on April 27. In addition she earned NCAA Region 3 All-Tournament team honors in helping the Tigers advance to the Women’s College World Series.

Ranked in the top 10 in the SEC in triples, walks and stolen bases, Harris hits LSU’s only grand slam of the season in a run-rule victory over nationally ranked Auburn that clinched the SEC Western Division title for the Tigers. She also ranks in the top 10 in single-season stolen bases in school history.

LSU led the way with seven of the 15 first-team All-Louisiana selections, including three of the four unanimous selections. The Tigers had an All-Louisiana best nine selections, followed by UL-Lafayette with six and Centenary and Louisiana College with three each.