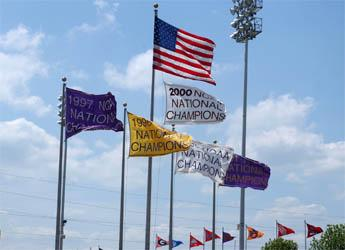 LSU will play host to an NCAA regional tournament for the 15th straight season and for the 16th time overall. The NCAA Baton Rouge Regional begins on Friday, June 4 and continues through Sunday, June 6.

Ticket information for the Baton Rouge Regional will also be announced on Monday.

The NCAA Division I Baseball Committee will set the entire 64-team bracket Monday through both the super regionals and the first round of the Men’s College World Series. The committee will not reseed the field after play begins.

All 16 regional sites were selected Sunday by the NCAA Division I Baseball Committee.

By virtue of being awarded a regional, 12 of the host institutions also have been selected as at-large teams to the 64-team field, but some could win automatic berths Sunday in their respective conference tournaments. Cal State Fullerton, Notre Dame, Rice and Stanford already have clinched automatic berths.

This will be the 23rd time that Florida State has hosted a regional, while Miami and Texas are hosting for the 20th time since the NCAA went to the regional format in 1975. LSU is hosting a regional for the 16th time, while Stanford (13th), South Carolina (10th), Georgia Tech (sixth), Cal St. Fullerton (fourth), Notre Dame (fourth), Rice (fourth), Arkansas (second), and Georgia (second) have hosted in the past as well.

Thirty Division I conferences receive an automatic berth in the field of 64, along with 34 at-large selections.

Selection of the eight super regional hosts will be announced Sunday, June 6, live on ESPN SportsCenter during the 10 p.m. Central time telecast. A telephonic news conference will follow, at approximately 10:30 p.m. Central time.