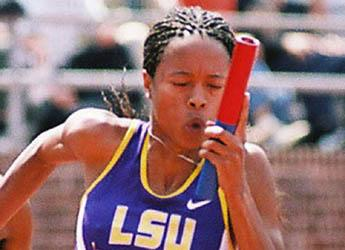 BATON ROUGE — The Lady Tigers blew away the competition on the second day of the NCAA Mideast Regional to earn the meet title by 56 points over second-place Tennessee. The men finished second behind Arkansas, but strong individual performance put them in good position to compete in the NCAA Championship meet.

Senior sprinters shined for the women as LSU earned 13 spots in individual events, plus a relay team, in the championship meet in two weeks in Austin, Texas. Seven men earned places in that meet along with two relay teams.

“We lined up and got things done,” said LSU head coach Pat Henry, who will be vying for his 28th and 29th national titles in Austin. “Performances were good and in many events they were very good.”

LSU’s Kelly Willie had a personal record in his first place finish in the men’s 400 meters. His time of 44.81 is the second best in school history.

LSU senior Muna Lee swept the 100 and 200 meter titles in her last meet at Bernie Moore Stadium. Teammate and fellow senior Lolo Jones won the 100 meter hurdles with a 12.83.

The Lady Tigers had 111 points in the final standings, ahead of second place Tennessee with 65 points. Michigan was third with 53 points.

Arkansas finished with 95 points in the men’s standings, while LSU scored 70. Auburn was third with 51.

The Lady Tigers dominated several events on the track. They qualified three athletes both in 400 meter dash and the 100 meters hurdles. Jones was followed closely by RaNysha LeBlanc in third and Brittany Littlejohn in fourth.

Neisha Bernard-Thomas moved on the championship meet with a third place finish in the 800 meters.

Both the men’s and women’s 4×400 meter relay teams moved on to the final competition. The women’s team of Regis, Davy, Monique Hall and Tanya Osbourne finished second to Tennessee with a 3.31.81.

Nicole Toney finished second in the triple jump with a 43-07.75 mark.

Willie also made up for a gap in the 4×400 meter relay, winning the event for the Tigers in his anchor leg. The team competed without its usual third leg, Bennie Brazell.

The men’s 4×100 meter relay team placed a close second to Arkansas despite also competing without Brazell, the usual anchor. The team of Willie, Pete Coley, Marvin Stephenson and Robert Parham ran a 39.59, while the Hogs finished with a 39.18.

Daniel Trosclair finished fourth in the pole vault with a 17-03.00 mark.

The Lady Tigers’ performance came despite one relay team not in today’s final heat. They enter the championship meet ranked second in the nation. The men are ranked third.

“We’ve got to just play it by ear and see what happens,” Henry said. “We’ve advanced in good position, so we’ve done the things we needed to do. We’ve got to get a couple of people a little more healthy, but I think we’re in good shape.”