Tigers in Good Position After First Day of Mideast Regionals 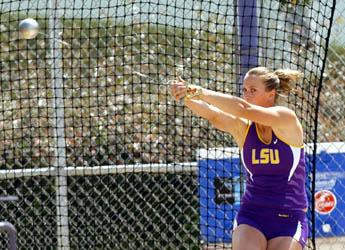 BATON ROUGE — LSU used its home track to make a strong case for its NCAA title hopes in the first day of competition in the Mideast Regional Meet. Several athletes had the top performances among the 70-plus teams represented.

Five LSU athletes also qualified for the NCAA Finals Meet, which will be held in two weeks Austin, Texas.

The Lady Tigers qualified 13 for tomorrow’s final running heats, while the Tigers will have two sprinters and a relay team in the running events.

“Things went pretty much as expected,” said LSU head coach Pat Henry. “We had some great performances today. The preliminaries turned out like we thought.”

The Lady Tigers were third in the team standings with 19 points after the first day. The men were in third also with 17 points. Ohio State led the women’s teams with 22 points, following by Michigan State with 21. Auburn and Purdue were tied for first in the men’s team standings with 23 points each.

Britney Henry opened the afternoon with a decisive first-place finish in the hammer throw. She set a school record and a PR with a 205-11 meter throw, three feet better than her previous best.

John Moffitt and LeJuan Simon qualified for the men’s final meet in the long jump. Simon set a PR, jumping 26-03.50 for a third place finish. Moffitt second with a 26-06.25.

“John’s time was good for coming off an injury,” Henry said. “We also had two good pickups in the women’s long jump.”

Karmen Payne and Tina Harris both qualified for the final meet in the women’s long jump. Harris, a freshman, finished fourth with a 20-04.50 and Payne was fifth with a 20-02.50.

LSU also posted record-setting performances on the track. Kelly Willie set a PR in the 400 meters at 45.12. His time was the fourth-best in school history.

The men’s 4×100 meter relay team of Willie, Pete Coley, Marvin Stephenson and Robert Parham had a 39.72 to lead the qualifiers.

The women’s 4×100 meter relay team was disqualified for dropping the baton during an exchange. But because the team of Muna Lee, Monique Hall, Stephanie Durst and Lolo Jones recorded the top time in the nation in April, they will still compete in the finals.

Lee recovered quickly and had a brilliant day in individual events. Her 200-meter dash time of 22.47 broke a track record set by Gwen Torrence in 1995. The time was a PR and was the third best in school history. She also posted the top qualifying time in the 100 meters with an 11.07.

Three women’s hurdlers advanced to tomorrow’s finals. Jones had a 13.06 to lead all qualifiers. RaNysha LeBlanc and Brittany Littlejohn qualified with the fourth and fifth best times, respectively.

LSU also had three qualifiers in the women’s 400 meter dash. Nadia Davy had the afternoon’s top time, a 51.85.

Bennie Brazell was also disqualified in the 400 meter hurdles, but he was also saved by top performances earlier in the season. He has the nation’s third best time in the event and will still compete in the final meet.