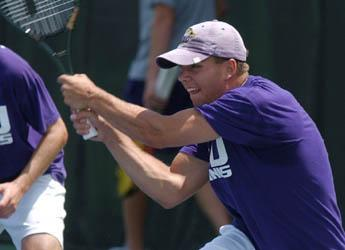 TULSA, Okla. — Bryan Fisher and Jason Hazley were knocked out of the NCAA Doubles Championship Tournament on Friday when they were handed a 6-2, 6-0 loss by Pepperdine’s Pedro Rico and Calle Hansen in the second round.

Rico and Hansen came into the match with plenty of momentum after upsetting the tournament’s fifth-seeded team in the first round.

“We ran into a hot team today,” said LSU head coach Jeff Brown. “They were firing from the beginning and there was nothing we could do to slow them down.”

The loss ends Fisher and Hazley’s run as a doubles team. Fisher, the SEC Scholar Athlete of the year, graduated last week. Hazley, a junior, returns next year.

The No.13-ranked pair of Fisher and Hazley competed this year for the second consecutive time in the doubles championships. They end the season with a 21-12 record.

“Fisher and Hazley were a great team for us,” Brown said. “We appreciate everything Bryan has done for the University. Jason will be back next year and we expect good things from him then.