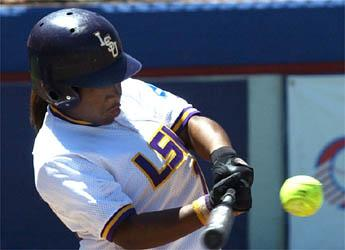 OKLAHOMA CITY — Two runs in the top of the first inning by second-seeded UCLA were all the third-seeded Tigers would allow, but that was all the Bruins needed as the LSU softball team fell 2-0 in their second game of the Women’s College World Series on Friday afternoon at ASA Hall of Fame Stadium.

The win moved the defending national champion Bruins (45-9) into the semifinals on Sunday were UCLA will face either Michigan, Stanford, Florida State or Oklahoma.

In the top of the first, the Bruins scored two runs on four hits in what proved to be the only runs of the game. UCLA recorded only three hits and had just one runner reach third the remainder of the game.

After being shut down through the first three innings, LSU recorded four hits over the final four innings and had the tying runs in scoring position with no outs in the sixth. The Tigers, however, could not push a run across and stranded five on base, including three in scoring position.

“I wish I could take back that first inning, but I know I can’t,” said LSU head coach Yvette Girouard. “I think we did a great job after that. We had our opportunities, but we just couldn’t quite break through. Our kids never gave up. They fought the whole way and I’m really proud of them for that. We took our cuts, but we got unlucky and it just didn’t happen for us today.”

A day removed from a 13-inning complete-game win on Thursday, Kristin Schmidt came back to throw the complete game on Friday. She allowed two runs on seven hits with a walk and six strikeouts in the loss, falling to 36-6 on the season.

Keira Goerl earned the win for UCLA to improve to 29-7 on the season. With the complete-game shutout, she allowed four hits with a walk and five strikeouts.

UCLA got on the board early with a pair of runs in the top of the first. With one out, Andrea Duran recorded an infield single. Lisa Dodd then singled through the left side to send Duran to second.

With two outs, Stephanie Ramos singled to right center, scoring Duran and sending Dodd to third. A single down the left field line by Jodie Legaspi scored Dodd and put the Bruins ahead, 2-0.

After Goerl was perfect through the first three innings, LaDonia Hughes recorded a bunt single to break it up. Lauren Castle then singled to shortstop, sending Hughes to second. With one out, Julie Wiese reached on a fielder’s choice as Castle was out at second and Hughes moved to third. A ground out by Leigh Ann Danos then ended the inning.

After the first inning, Schmidt settled down and allowed three harmless singles the rest of the game. Her only real trouble came in the fifth inning. After walking the leadoff batter, a muffed throw by Sara Fitzgerald covering the sacrifice attempt at first runners on second and third with no outs. Schmidt then retired the next three batters in order and got out of the inning unhurt.

In the bottom of the sixth, the Tigers mounted their biggest threat of the game. Camille Harris led off with an infield single. After she stole second, she moved to third as LaDonia Hughes reached on a bunt that developed into a double as it trickled away from a diving Duran at third. With runners on second and third with no outs, Goerl recorded back-to-back strikeouts before Wiese grounded out to third to end the inning.

Never willing to concede the game, the Tigers again threatened in the bottom of the seventh. Leigh Ann Danos led off the inning with a walk to bring the tying run to the plate. LSU, however, could get her no further as Goerl retired the next three batters, two by strikeout, to end the game.

Earlier this season, the Tigers posted wins over both Florida State and Washington in the NFCA Leadoff Classic on their way to the tournament championship. LSU defeated Washington, 4-2, before knocking off Florida State, 4-3, in the championship game.

If the Tigers win on Saturday, they will advance to take on either Oklahoma or California on Sunday at 2:30 p.m. LSU will have to defeat that opponent twice on Sunday to advance to the national championship game on Monday at 7 p.m.