It Ain't Over Til It's Over? You Bet! 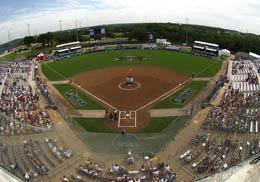 OKLAHOMA CITY — Okay, let me bring out my book of Yogi Berraisms to describe the crazy, wild amazing 3-2, 13-inning win for LSU in the Women’s College World Series here Thursday.

It’s never over ’till it’s over.

And to quote the late Jack Buck on radio at the World Series after Kirk Gipson’s first-inning pinch-hit homer to win Game 1 of a World Series, “I do not believe what I have just seen.”

The last time LSU won a Women’s College World Series game in 2001 it was a 13-inning error by the Oklahoma shortstop that advanced LSU to the Sunday bracket final.

To advance to Friday’s second round against UCLA, the Tigers Thursday needed a two-out error in the 12th to eventually tie the game and then two-errors on one play that brought home the winning run.

Amazing, how it ended up being that way, but somehow the good teams seem to know that as long as the umpire hasn’t signaled the final out, the game continues and although the ground ball in the 12th looked to be an easy out and the game ender, it ended up by the dugout after being kicked by the pitcher.

It took 13 innings, over 3 hours and kept an amazingly large crowd for the first day on the edge of their seats watching pitchers Kristin Schmidt of LSU and Nicole Motycka do battle. Schmidt was striking out batters right and left, Motycka was pitching most of the batters inside, jamming them and forcing weak popups or groundouts.

Some defensive lapses and two rare hit batters by Schmidt gave Michigan a chance to score several times in the game, but Leigh Ann Danos was playing like a catcher possessed. She threw out a runner at second in the third and in the sixth and in the eighth caught a bunt that didn’t get three feet off the ground and then had enough composure to throw to first for the double play.

For one day, LSU was unable to get the timely hit it needed in regulation, leaving the bases loaded in the third, runners on second and third in the fourth and in all, 13 runners on base. In an atmosphere like the Women’s College World Series you only get so many opportunities and it turned against LSU when Michigan opened the 12th inning triple, home run to go up 2-0.

But the Tigers weren’t going to the losers bracket willingly. When Motycka kicked the ball and put two runners on base with two outs, you just thought that Michigan probably blew their best chance ever to win a WCWS game for only the third time in 15 games. Suddenly, Danos singles to score one and then from no where a pass ball scores another and the game goes on to the 13th, the third time in NCAA play the Tigers have been 13 and they have won them all. Another nice omen.

Schmidt did her job, taking Michigan down 1-2-3. The first two batters went down and Sara Fitzgerald singled and the game was on. Camille Harris, who with LaDonia Hughes can cause more havoc to an infield then any one can imagine, hit one deep into the hole at shortstop. The shortstop could have held the ball and has runners on first and second with two outs, but funny things happen when the pressure is on in a tight game. The ball was thrown, it was in the dirt, the first baseman backhanded it and the race was on.

Fitzgerald was going to be held at third and the play should have been over there, but the right fielder threw one that bounced crazily to the catcher and away and the Tigers were winners, much to the delight of the big LSU contingent that seems to have been on the road with the team for the last three weeks.

How big is a first game win for LSU? Only one team, UCLA last year, has ever lost the first game and come all the way back to win the title. It just doesn’t happen much. Even if you lose the second game, there is a way to get to the championship game on Monday without playing more than one doubleheader in a day. The loser of the LSU-UCLA game switches brackets after playing at 2 p.m. Friday and doesn’t play again until 8 p.m. Saturday. Then would come the bracket championship on Sunday, where the loser would have to win twice, kind of like the Tigers had to do to win the SEC title.

LSU is still not a favorite to win it all. People here still like UCLA and Oklahoma and Florida State on the other side, but never the less, no matter how it was done, it was a big win for SEC softball on the grandest stage of all in college softball. LSU has beaten good Pac 10 teams this season. Let’s put LSU and UCLA out there Friday and see what happens. The Tigers’ win today continued to built the respect for this program and again show that the chemistry and the belief system of this LSU program just doesn’t allow them a chance to not believe that they will win, somehow, someway.

This could well be the best coaching job Yvette Girouard and staff could have ever done. We’ll talk more about that down the road in another column as we continue from the showplace of college softball, the Women’s College World Series.