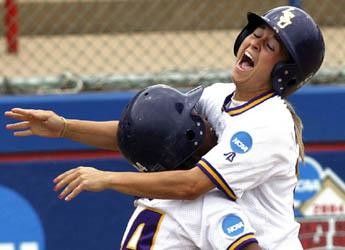 OKLAHOMA CITY — Down 2-0 in the 12th, the third-seeded LSU softball team rallied to defeat No. 6 seed Michigan, 3-2, in 13 innings in the first game of the Women’s College World Series on Thursday afternoon at the ASA Hall of Fame Stadium.

The Tigers now advance to take on the winner of the UCLA-Stanford game on Friday at 2 p.m. The game will be broadcast nationally on ESPN and in Baton Rouge on cable channel 35. The LSU Sports Network will also carry the game in Baton Rouge on 107.3 FM and on the internet at www.LSUsports.net.

After the Wolverines (54-12) broke the scoreless tie with a two-run home run in the top of the 12th, the Tigers (55-10) would not go away without a fight. LSU scored three unearned runs in response to take the win an inning later. With two outs and LaDonia Hughes on first in the 12th, Leslie Klein reached on a fielding error by Michigan pitcher Nicole Motycka that should have been the third out.

A single down the right field line by Leigh Ann Danos scored Hughes from second and sent Klein to third. She then scored as a ball got past Wolverine catcher Monica Schock, tying the game at two.

In the bottom of the 13th, Sara Fitzgerald singled through the left side with two outs. On an infield single by Camille Harris, Michigan shortstop Jessica Merchant threw the ball away at first, allowing Harris to move to second and Fitzgerald to go to third. An errant throw by right fielder Courtney Betley to the plate then sent Fitzgerald home for the game-winning run.

“This was a tough game for Michigan to lose,” said LSU head coach Yvette Giroaurd. “Certainly it could have been anybody’s ballgame, but it is the epitome of our team that we bend but don’t break. The young lady on the mound refuses to surrender and so does our team. Sometimes you got to have a break go your way and they probably could have put us away with that third out, but you got to kind of think that destiny is on our side because we just find a way to win.”

In five WCWS games, LSU has now recorded three extra-inning games, posting a 2-1 record. In 2001, the Tigers lost their first game of the tournament, 2-1, to Stanford in eight innings. Two games later, LSU defeated Oklahoma, 2-1, in 13 innings. Along with a 13-inning game against Southern Miss in the 2000 NCAA Regionals, the 13 inning games against Michigan and Oklahoma are the longest in school history.

All-American Kristin Schmidt went the distance for the Tigers to improve to 36-5 on the year, tying the school record for wins in a season. In a career-high 13 innings pitched, she allowed two runs on six hits with a walk and 13 strikeouts.

After allowing runners to reach scoring position in four of the first five innings, Schmidt faced the minimum over the next six innings. In the top of the 12th, she gave up a leadoff triple before allowing a two-run home run, the only runs she allowed in the game.

“We answer back all the time,” said Schmidt. “Sometime someone else scores and we always have a way to answer right back. That’s the epitome of our team. That’s what we do best.”

Motycka started and threw 11 and two-thirds innings to earn a no-decision for Michigan. She allowed two unearned runs on eight hits with four walks. Jennifer Ritter came on in relief and allowed one unearned run on two hits with one strikeout in an inning of work to fall to 24-8 on the season.

Tiffany Haas led off the game with a single to center field for Michigan before Schmidt retired the next six batters. With one out in the bottom of the second, Julie Wiese singled up the middle for LSU. She advanced on a wild pitch but was stranded on second.

In the top of the third, Betley was hit by a pitch to lead off the inning. She was then caught attempting to steal second. With two outs, Hass singled to left field. She advanced to second as Meghan Doe reached on a fielding error by Wiese at third. Schmidt then struck out Schock to end the inning.

Harris recorded a one-out walk to in the bottom of the third. A bunt single by Hughes moved Harris to second. The pair moved to second and third on a sacrifice by Lauren Castle. A walk to Leslie Klein loaded the bases, but the Tigers could not push a run across as Merchant made a diving catch at shortstop to end the inning.

Merchant was then hit by a pitch to lead off the fourth inning for the Wolverines. She moved to second on a sacrifice bunt by Grace Leutele. On a pop out to shortstop by Jennifer Olds, Merchant moved to third as a throw from Lauren Delahoussaye skipped away from Fitzgerald at second. A strike out by Schmidt then ended the inning and the threat.

With two outs in the bottom of the fourth, Delahoussaye reached on a walk. She moved to second as Fitzgerald reached on a fielding error by Leutele. On a ground ball by Harris to third, the first base umpire ruled that the throw pulled Olds off the base at first and was safe. After a replay was aired on the outfield television screen, the call was overturned and Harris was ruled out to end the inning.

In the top of the fifth, Betley walked to lead off the inning. She moved to second on a sacrifice bunt by Rebekah Milian. With two outs, Betley moved to third as Doe reached on a fielding error by Delahoussaye. With runners on first and third, Schock flew out to center to strand Betley on third.

It was the LSU defense that came up big for the Tigers in the top of the eighth. After Haas led off with an infield single, she was thrown out going to second on a fielder’s choice by Doe. On a bunt attempt by Schock, Danos caught the ball in the air off the bat and doubled off Doe on first for the third out.

Merchant led off the top of the 12th inning with a triple to right field for Michigan. Leutele then hit her sixth home run of the season to left field to break the scoreless tie and give Michigan the 2-0 lead.

The Tigers answered back in the bottom of the 12th. With one out, Hughes reached on a walk. With two outs, Klein reached on an error by Motycka as Hughes advanced to second. A single down the right field line by Danos scored Hughes and sent Klein to third. She then scored on a passed ball to tie the game and send it to the 13th.

With two outs, Fitzgerald singled through the left side. On an infield single by Harris, errors by Merchant and Betley allowed Fitzgerald to come around and score the winning run.

The Tigers earned their first victory over Michigan in school history, moving the all-time series record to 1-3. LSU is also 3-2 in Women’s College World Series games, after posting a 2-2 record in 2001.

If the Tigers win their Friday game, they will have the day off on Saturday before resuming play on Sunday at noon on ESPN. With a loss on Friday, LSU would play on Saturday at 8 p.m. on ESPN.