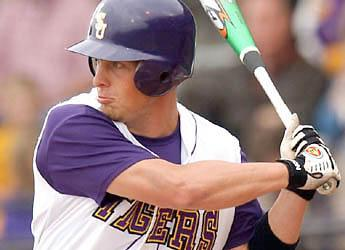 HOOVER, Ala. — Georgia catcher Clint Sammons lined a single over the head of right fielder Jon Zeringue in the bottom of the ninth inning to score Jason Jacobs and give the 10th-ranked Bulldogs a 1-0 victory over No. 3 LSU, eliminating the Tigers from the 2004 Southeastern Conference Tournament on Thursday at Hoover Metropolitan Stadium.

LSU starting pitcher Lane Mestepey went the distance in arguably one of the most impressive starts of his career, as the lefty gave up just seven hits in his second complete game this season.

Mestepey fell to 5-3 with the hard-luck loss. The junior began the game by throwing 4.2 innings of no-hit ball and walked just one while striking out two.

“It’s hard to win a game with just four hits,” LSU coach Smoke Laval said. “J.C. (Holt) hit two, Blake (Gill) hit two and I think we only had one extra base hit the whole series. Lane threw well enough to win the game, but you’ve got to swing the bats.

“Lane did a great job all day. We didn’t see many hard swings except maybe there at the end. Our offense just let us down, not to take anything away from Georgia.”

Georgia’s Marshall Szabo led off the ninth with a double to left field, and he moved to third on a groundout by Josh Morris. After Mestepey intentionally walked Jason Jacobs, Sammons lifted a single into right field to score Szabo with the winning run.

Will Startup (5-2) picked up the victory in relief for the Bulldogs, pitching five innings without allowing a hit. The southpaw walked only one and struck out two.

Bulldog starter Sean Ruthven went four innings, giving up a mere four singles. Ruthven struggled at times with his control, walking four, but was helped by two double plays. He also added three strikeouts in his four innings of work.

The Tigers (41-17) dropped the first two games of the SEC Tournament for the first time since 1985. Prior to this season’s event, LSU had been 12-4 in the tournament dating back to 2000. Georgia improved to 38-19 and advanced to meet either Florida or Vanderbilt on Friday at 3 p.m.

Centerfielder J.C. Holt and shortstop Blake Gill had two hits apiece for the Tigers, as no other LSU batter recorded a hit in the game.

The Tigers threatened in the first inning against Georgia starter Ruthven, loading the bases with two outs, but Ruthven escaped the jam by getting LSU designated hitter Nick Stavinoha to ground back to the mound.

LSU once again put runners in scoring position in the top of the second inning, but Ruthven got left fielder Ryan Patterson swinging on a pitch in the dirt to end the frame.

Catcher Matt Liuzza had led off the second with a walk but was erased when third baseman Clay Harris hit into a double play. Will Harris followed with a walk and Holt doubled to right center field to put runners on second and third with two outs. Patterson narrowly missed hitting a three-run home run prior to striking out, but the ball curved just to the left of the foul pole down the left field line.

Georgia and LSU combined to leave six runners on base through the first two innings, and the Tigers stranded four in scoring position.

The Tigers once again put the leadoff batter on base to start the fourth, but were unable to score. Stavinoha walked to lead off the inning and was advanced to second after a perfect sacrifice bunt by Liuzza, but Stavinoha was tagged out between second and third after breaking on contact on a ball hit to short by Clay Harris. Will Harris went down swinging to end the inning, as the Tigers again failed to take advantage of a scoring opportunity.

Mestepey was basically untouchable through the first four innings, as he faced just one batter over the minimum. Bulldog first baseman Josh Morris reached on an error by Gill to lead off the third, the only blemish in Mestepey’s first four innings.

Holt started the top of the fifth with a single up the middle to chase Ruthven, but Patterson quickly followed with a groundball double play to shortstop to erase Holt, as LSU hit into its third double play of the game.

Mestepey finally yielded his first hit in the bottom half of the fifth as left fielder Bobby Felmy lofted a single to right field in front of Zeringue with two outs, but Mestepey then got Kyle Keen to fly out to Holt in center the end the inning.

Georgia put two runners on with only one out in the bottom of the sixth but Mestepey induced a groundball off the bat of second baseman Marshall Szabo which Tiger second baseman Ivan Naccarata scooped up and turned into an unassisted 4-3 double play to end the inning. Mestepey threw only 63 pitches through six innings.

Kyle Keen ripped a single to left to lead off the bottom of the eighth but was thrown out at second base on an attempted sacrifice bunt by right fielder Joey Side.

Startup retired 13 straight batters before Stavinoha walked on four-straight pitches with two away in the top of the ninth, as he became the first LSU batter to reach base since Holt led off the fifth with a single. Startup caught Liuzza looking to end the inning.