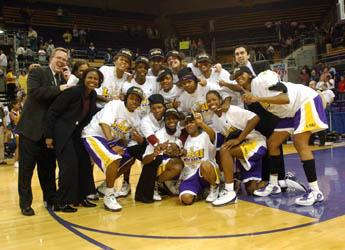 BATON ROUGE — LSU remained in 10th place among all Division I teams in the latest edition of the United States Sports Academy Director’s Cup Standings, which were released on Thursday.

The most recent standings reflect the addition of point totals from the sports of women’s golf and women’s lacrosse. LSU picked up 41.5 points for its 32nd place national finish in women’s golf to run its total to 598.75.

Florida, the leader among Southeastern Conference teams with 715 points, stands in sixth place overall followed by Georgia in seventh place with 645.5 points.

LSU received 300 of its 598.75 by claiming national titles in football, and men’s and women’s indoor track and field. The Tigers also added 85 points for their Final Four appearance in women’s basketball and 71 points for a seventh place showing in women’s gymnastics.

The women’s swimming and diving team contributed 53 points, while the men’s swimming team added 50 points to round out the scoring for LSU.

LSU still has points to be awarded in the sports of baseball, softball, men’s and women’s tennis and men’s golf.

The United States Sports Academy Directors’ Cup was developed as joint effort between the National Association of Collegiate Directors of Athletics and USA Today. Points are awarded based on each institution’s finish in up to 20 sports – 10 women’s and 10 men’s. Each national champion receives 100 points.