Changes on the Horizon for Women's College World Series 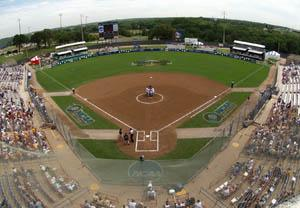 Wednesday night’s scheduled opening ceremonies of the 2004 Women’s College World Series was to have marked the beginning of another championship weekend here in Oklahoma City, but a thunderstorm cell that had all the television stations doing wall to wall coverage early in the evening cancelled the fun and festivities, but it is not expected to delay the start of the tournament and LSU’s opener with Michigan at 11 a.m. Thursday.

Earlier in the day came the announcement of a major format change in women’s college softball that will effect the way teams get to OKC and the time they may have to spend here.

While change is good for the competing teams and the televising entity, ESPN, the real test will be for the fans of the WCWS who for years have traveled to Oklahoma City on Memorial Day weekend. Now, their favorite tournament will be pushed back next year until June 2-8 as the tournament adds a round of Super Regionals prior to the Women’s CWS.

The format will be exactly like baseball’s 64 tam playoffs. There will be 16 sub-regionals with four teams each heading to eight Super Regionals with a best of three format. The eight winners come to the WCWS and like it’s male counterpart, the title will be decided in a best of three show down among bracket winners.

“It gives us three more games in prime time on ESPN,” said Jacquie Joseph of the NCAA softball committee. “We are thrilled with the changes. It’s better for the student-athletes. The eight team regionals have been a bit of a circus at times and not that many schools have the facilities to host eight-team regionals. We feel this will open the hosting process to all quadrants of the country.”

At first glance, it appears that this could be a benefit to LSU that does have a facility at the moment that could host a four-team sub-regional and a Super Regionals, while its facilities have been pretty much disregarded as stretched to the limits to host an eight-team show.

LSU Coach Yvette Girouard remembers when she first started coming to the Women’s College World Series only the championship game was televised and it was on a two-day tape delay basis. This year, ESPN is committing to 14 live games out of 15 with a half-hour between games shows on Thursday and Saturday. Since committing to televise more games a few years ago, softball’s ratings have been very strong in ESPN’s demographic group that it covets and now the women’s CWS is growing just like the men’s CWS did in the 1990s.

There are very few coaches who will be sad to see the eight-team regional format disappear. Circus? It was a nightmare. But when the NCAA said you can have 64 teams but you can’t add a week of playoffs when the field was expanded to 64 teams in 1993, “you get what you get when you get it,” said Jones. “The coaches weren’t going to turn down bracket expansion just because they didn’t get what they wanted in format right away. Now things have come around to them.”

Interestingly, one pitcher could go all three-nights in a three-game championship series for the WCWS title, but the same may now not be true in the Super Regionals as the plan is to play a doubleheader the first day and then a third game if necessary the second day. What pitcher would try to go both games in the same day? It’s been done a lot in softball, but back-to-back games gives a team with a strong second pitcher a definite advantage in that situation.

The obvious worry is will fans be able to commit a week on a non-holiday weekend. Jones is concerned, but confident things will be okay. The continued growth of the sport seems to back that up and it seems doubtful that even in mid-week, ESPN won’t be televising a championship round with a bunch of empty seats.

Now committee members are hoping that Wednesday night’s wash out of the opening ceremonies isn’t a bad omen for what will be the final Memorial Day weekend of WCWS softball in this city for the time being.