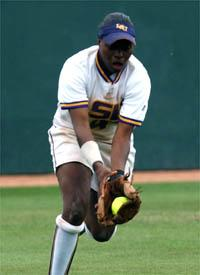 Seniors Kristin Schmidt and LaDonia Hughes were named to the All-America second team, while freshman Leslie Klein was selected as a third team honoree. With three All-America selections, the Tigers joined Florida State, Michigan and Stanford with three honorees, second to only California nationally with four selections.

Hughes ranks in the top 10 in the SEC in batting average, runs scored, hits, triples and stolen bases. This season she ranks fifth in single-season stolen bases in LSU history, while also ranking in the top 10 in single-season batting average. The Tiger record holder for consecutive games played without an error, Hughes leads the team with 24 multiple-hit games, fourth-most in LSU history.

Klein was named to the third team in the outfield after being a second-team All-South Region, first-team All-SEC and All-SEC Freshman team selection. In addition, she was a member of the SEC and NCAA Region 3 All-Tournament teams.

The Sunrise , Fla., native, ranks in the top 20 in the NCAA in RBIs per game this season and broke the LSU single-season home run record with her 13th round tripper of the year. In addition, she tied the school record with a 15-game hitting streak and tied the SEC single-game record with seven RBIs against Alcorn State.

Fifty-four players were named to the 2004 Louisville Slugger/NFCA Division I All-America first, second and third teams. The awards were announced Wednesday in Oklahoma City. All three teams were selected by NFCA-member NCAA Division I coaching representatives, based on nominations from the 2004 season.