Skupski Falls in First Round of NCAA Singles Play 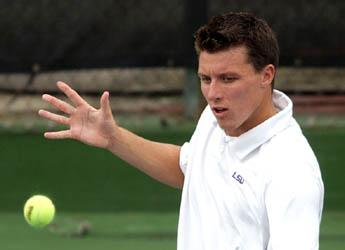 TULSA Okla. — LSU’s Ken Skupski was eliminated Wednesday from the NCAA Singles Championship Tournament by No. 5 seed Phillip King of Duke in the first round.

Skupski, a freshman, brought the first set to a tiebreaker, but the senior King pulled away for the lead.

Skupski won the first game of the second set, but King quickly regained the lead to advance to tomorrow’s round of 32.

King, the Region II Senior Player of the Year, is one of the highest-seeded players left in the tournament. No. 1 seed Brian Wilson fell early Wednesday morning to Robert Searle of Rice.

No. 4 seed Catalin Gard of Ole Miss and No. 6 Jesse Witten of Kentucky were also eliminated.

“I think Ken learned a lot in the match and over the course of the year,” Brown said. “I’m proud of the year he had.”

Skupski finishes his first year as a Tiger as one of the top freshmen in the nation. He was a First-Team All-SEC selection and beat 11 ranked opponents.

NCAA Men’s Tennis Singles Championships — May 26, 2004
Round One