Gators Slip Past Tigers on Wildpitch, 5-4 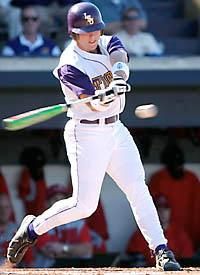 HOOVER, Ala. — Third baseman Jonathan Tucker scored the game-winning run on a wild pitch after tripling to lead off the 10th inning as No. 21 Florida edged third-ranked LSU, 5-4, in the opening game of the Southeastern Conference Baseball Tournament at Hoover Metropolitan Stadium.

The Tigers (41-16) will play an elimination game at 10 a.m. Thursday against the loser of Game 2 between Vanderbilt and Georgia. The Gators (39-18) advanced to the winner’s bracket and will play the winner of Game 2.

LSU dropped its first SEC Tournament opener since 1999 when Auburn defeated the Tigers, 6-2.

After surrendering three runs in the first two innings, Meier found his rhythm in the middle innings, holding Florida without a run from the third through the sixth.

“I gained my composure and got in a groove so things would fall in place,” said Meier. “I definitely have a little more confidence. I know how crucial these games are and what is at stake.”

Left fielder Ryan Patterson, the SEC Player of the Week, went 3-for-5 with two runs and one RBI, extending his hitting streak to six games.

Tucker doubled down the left field line to start the game and Adam Davis delivered a bunt single as the Gators had a two-on, no-out threat in the first. C.J. Smith’s sacrifice fly and Ben Harrison’s RBI double enabled Florida to take a 2-0 lead.

LSU responded by scoring two runs on three hits off of starter Justin Hoyman, the 2004 SEC Pitcher of the Year. J.C. Holt worked a leadoff walk and Patterson dropped a single into shallow centerfield. Blake Gill’s sacrifice bunt gave Jon Zeringue a chance to drive in his 52nd and 53rd runs of the season.

Zeringue, who went 3-for-15 in last weekend’s series against Ole Miss, delivered by ripping a two-run single through the middle to knot the game at 2-2.

Matt LaPorta’s second-inning leadoff homer — his fourth in as many games — broke the 2-2 tie, but Ivan Naccarata’s RBI double on an 0-2 pitch in the Tigers’ half of the second tied the game again.

LSU looked to have started a threat in the second and fourth innings as both leadoff batters reached but Hoyman induced two double plays to get out of trouble.

Sophomore Jason Determann (5-4) came on in relief of Meier in the seventh, inheriting a two-on, one-out jam with runners at the corners. Florida went ahead 4-3 on Davis’ sac-fly that plated Justin Tordi.

Tordi reached on a single to start the seventh and advanced to third when Meier elected to throw to third base on Tucker’s fielder’s choice groundball. He was unable to retire Tordi as the ball was fired into the dirt.

In the seventh, LSU answered the run and tied the game for a third time on Patterson’s two-out double.

The Tigers looked to have something going an inning later when Naccarata drew a one-out walk and and Nick Stavinoha ripped a single to left field, chasing Hoyman from the game.

Naccarata was then caught stealing and Matt Liuzza fanned, allowing O’Day to escape from any damage.

After holding LSU scoreless in the ninth, O’Day got the run he needed as Tucker’s leadoff triple led to the game-winning run. He blasted the first pitch he saw from Determann into left field. Patterson, electing to try to make a diving catch, allowed the ball to carry past him.

Junior Jordan Faircloth allowed the winning run to score on a wild pitch to Ben Harrison.

O’Day (8-1) worked a scoreless ninth despite allowing a two-out single to Jon Zeringue.

“We had a lot of chances to win, but so did Florida,” said LSU head coach Smoke Laval. “We had a lot of good fortune with some good runs but Florida is a very, very good team.”