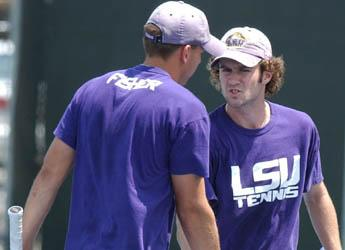 Skupski, a freshman from Liverpool, England, is currently ranked No. 30 in the nation. He is one of only two freshmen participating in the singles tournament.

“Ken is looking to finish strong and use this as a springboard for next season,” said LSU head coach Jeff Brown.

It will be the final doubles tournament for the No. 13-ranked duo of Fisher and Hazley. Fisher, a senior from Nashville, Tenn., graduated last week. The pair is competing for the second consecutive year in the doubles tournament.

“Fisher is trying to finish his career in a way that reflects the level of competition he has shown throughout his career,” Brown said. “And I’m sure Hazley wants to send him off with a big tournament.”

Fisher and Hazley are scheduled to play “not before 2 p.m.” Thusday, Brown said.

Live scoring for all matches will be available on LSUsports.net.