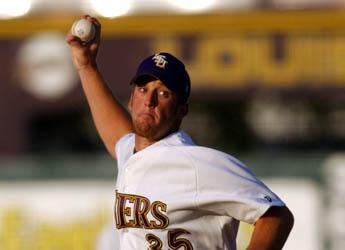 The game can be heard statewide on the LSU Sports Network (WDGL-FM 98.1 in Baton Rouge).

The winner of the LSU-UF game plays at 5 p.m. Thursday against the winner of Wednesday’s 1 p.m. game between Georgia and Vanderbilt. The LSU-UF loser will play the UGA-Vandy loser at 10 a.m. Thursday in an elimination game.

The LSU-Florida matchup represents the first meeting between the teams this year, as they did not meet in the regular season. LSU leads the all-time series with Florida, 45-24-1, and the Tigers have an 11-2-1 mark against the Gators this decade.

The Gators, however, hold a 7-5 advantage over LSU in SEC Tournament meetings between the clubs.

LSU has played in the SEC Tournament championship game in three of the past four seasons. The Tigers defeated Florida in the 2000 final, but suffered defeats to Mississippi State (2001) and Alabama (2003) in their other title game appearances this decade.

LSU concluded the regular season with a series victory at ninth-ranked Ole Miss, as the Tigers won their ninth SEC series in 10 weekends. LSU has also won 11 of its last 12 league series, dating back to last season.

The Tigers completed the regular season in second place in the Western Division, just one game behind Arkansas (19-11) and Georgia (19-11) in the overall SEC race. The Tigers won all five of their SEC road series this season, including four against teams ranked at the time of the series — South Carolina, Auburn, Tennessee and Ole Miss.

The Tigers’ 41-15 regular-season record is the best by an LSU team since the 1998 club also posted a 41-15 mark heading into the postseason. LSU reached the 40-win plateau for the 16th straight season, as the Tigers have recorded at least 40 wins each year since 1989.

Left fielder Ryan Patterson, named the SEC Player of the Week Monday, hit .467 (7-for-15) with one double, three homers, six RBI and four runs. Patterson, who has a team-high 13 homers on the year, led the Tigers to a 14-6 Game 3 victory, as he was 4-for-5 at the plate with two homers, two runs and a career-best five RBI. The effort marked the first two-homer game of Patterson’s LSU career.

Right-hander Nate Bumstead earned his team-best ninth win of the year in Game 2, limiting the Rebels to one earned run on six hits in 7.2 innings with three walks and six strikeouts.

Though he was charged with the loss in Game 1, left-hander Lane Mestepey worked his first complete game in nearly two years. Mestepey, who missed last season due to shoulder surgery, pitched eight innings on Friday night, allowing six earned runs on 10 hits with one walk and five strikeouts. The outing was Mestepey’s first complete game since June 1, 2002, when he went the distance versus UL-Lafayette in the NCAA Baton Rouge Regional.