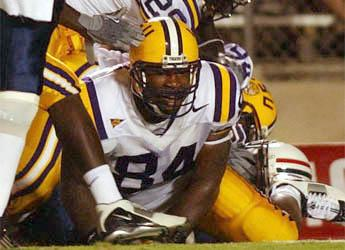 BATON ROUGE — LSU’s Marcus Spears and Kirston Pittman are both among 37 defensive ends from across the country named to the 2004 Ted Hendricks Award Pre-Season Watch List.

The award, which is in its third year of existence, is presented to college football’s top defensive end. Last year, Georgia’s David Pollack won the award, while Terrell Suggs of Arizona State captured the inaugural award in 2002.

Among the criteria used to determine the winner include on-field performance, leadership abilities and contributions to school and community.

Spears, a senior from Baton Rouge, is one of seven returning starters on defense for the Tigers. Last year, Spears earned First Team All-Southeastern Conference honors after racking up 49 tackles, 13 of which went for losses, for the nation’s top rated defense. Spears also added six quarterback sacks and he returned an interception 20 yards for a touchdown against Oklahoma in the BCS National Championship Game.

Spears has already been named a Pre-Season All-America by one publication and has been mentioned as the SEC’s No. 2 rated defensive end by another magazine.

Pittman, a sophomore from New Orleans, played in 13 games for the Tigers last year as a true freshman, finishing with 15 tackles and two sacks. Pittman earned Freshman All-SEC honors in 2003 as well as being an honorable mention Freshman All-America pick by the Sporting News.