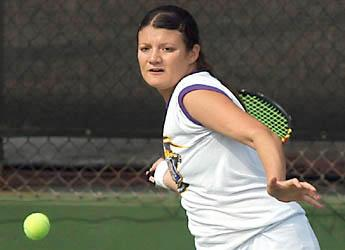 Ferguson, a senior from Houston, led the Lady Tigers this season from the No. 1 position, where she picked up eight wins over nationally ranked players. She is ranked 57th in the nation in singles.

Ferguson has done an about-face from her junior year, when she won just six dual matches.

“This is quite an honor considering the improvement Jessica has made from last year,” said LSU head coach Tony Minnis.

Cahana, also a senior, hails from Qiriat Bialik, Israel. She was named the East region player of the year and is currently ranked No. 30 in singles. She has a 29-7 overall singles mark this season.

But Ferguson has been tested over the season against some of the top players in the nation at No. 1 singles in the SEC.

“The way [Ferguson] has been playing, she could beat anybody,” Minnis said.

Ferguson has posted wins over two players in her quarter of the 64-player bracket. She beat No. 20-ranked Jessica Roland of Texas in March and clinched LSU’s win over Alabama in April with a victory over No. 28 Robin Stephenson.