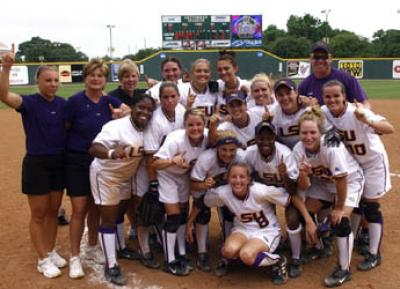 WACO, Texas — For the second time in the program’s history the LSU softball team will be playing in the Women’s College World Series as the Tigers went undefeated in the Region 3 play, overpowering Illinois, 4-1, on championship Sunday at Getterman Stadium.

“I told the girls before we left Baton Rouge that we are bussing straight to Oklahoma, so pack your bags until the end of the College World Series because we are not coming back,” said LSU head coach Yvette Girouard. “That has been our game plan since we left. Oklahoma is going to have a good time because the Tigers are coming to town.”

With four complete-game victories in the circle, All-American Kristin Schmidt earned Most Outstanding Player honors. She was 4-0 with a 0.45 earned run average, allowing just two earned runs in 31 innings. The Houston native also struck out 39 while allowing only 20 hits.

Additionally, Leslie Klein, Camille Harris and Lauren Castle earned All-Tournament honors for the Tigers. Klein went 8-for-13 (.615) with two doubles, two triples, three runs scored and four RBIs. Hitting at a .385 clip (5-for-13), Castle recorded a doubles, two RBIs and a tournament-best five runs scored. Harris went 4-for-11 (.364) with a doubles, a home run, one RBI and four runs scored in four games.

“This is a team that wouldn’t be denied,” said Girouard. “There are so many storylines in this team. At the beginning of the year we had kids that had struggles on the field that they had to conquer and they did, and to end it with a strikeout by Schmitty is the epitome of what she’s done this year. She has taken every challenge that we’ve given her and Klein has been about as on fire as you can get.”

Against Illinois, Schmidt threw her third complete-game three hitter of the tournament. As just one base hit reached beyond the infield, the senior allowed one unearned run while walking one and striking out nine to improve to 35-5 on the season.

The Tiger bats came alive for the first time in the tournament. LSU pounded out 13 hits, including two doubles and a home run. Eight of the nine Tiger batters recorded hits, including a school record-tying 4-for-4 performance by Klein.

LSU got on the board first and as they have all season, it proved to be prophetic, as the Tigers are now 44-0 when scoring first. In the bottom of the second inning, Julie Wiese hit her eighth home run of the season and the Tigers’ second of the tournament to give LSU the 1-0 lead. The home run also extended her school career record to 31 round trippers and into seventh place in SEC career home run history

In the bottom of the third, the Tigers tacked on another run. Klein singled through the left side to lead off the inning. With one out, she moved to second on a single through the left side by Stephanie Hill. A single to left field by Lauren Delahoussaye scored Klein from second the second LSU run.

An RBI double by Delahoussaye in the bottom of the fifth extended the lead to 3-0. Klein reached on a singled to lead off the inning. She moved to second on a wild pitch. With two outs, Delahoussaye doubled to left center, scoring Klein from second.

After allowing two infield singles in the top of the first inning, Schmidt retired 13 straight before Sarah Baumgartner singled to left field in the top of the sixth. Wiese bobbled an infield hit by LeeAnn Butcher to put runners on first and second for Illinois with no outs.

After a fly out to center, Schmidt walked Jenna Hall to load the bases. A fielder’s choice by Lindsey Hamma scored Baumgartner from second as Zobrist, pinch running for Hall, was out at second. Schmidt then struck out Erin Montgomery to end the inning.

LSU got the run back in the bottom of the sixth inning. With Camille Harris on first after reaching on a fielder’s choice, she moved to second on an infield ground out by LaDonia Hughes. A single up the middle by Lauren Castle scored Hughes from second to once against put the Tigers ahead by three, 4-1.

With runners on first and second after a single through the right side by Klein, LSU tried to add to its lead. On a single up the middle by Leigh Ann Danos, Castle attempted to score from second, but was thrown out at home by the centerfielder to end the inning.

In the top of the seventh inning, Schmidt struck out the side to end the game as the Tigers stormed the field and celebrated in the circle. The large contingent of LSU fans that  The third seed in the Women’s College World Series, LSU now advances to take on winner of Region 6 in Ann Arbor, Mich. Due to rain on Friday, play in the regional was behind schedule and a winner had not yet been determined. Michigan and Oregon State were playing Sunday night for the right to advance to the WCWS.

This is the second appearance in the Women’s College World Series for the Tigers. LSU advanced to the semifinals in 2001 after going undefeated through Region 3 in Baton Rouge.

The Tigers lost to Stanford in extra innings in the first round of the WCWS before defeating Iowa and Oklahoma. UCLA eliminated LSU in the semifinal round as the Tigers finished third nationally, their best finish in school history.