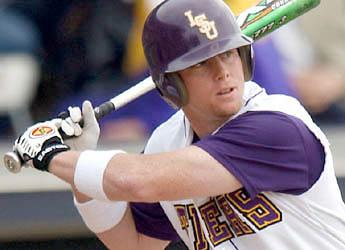 OXFORD, Miss. — For the sixth time in 10 Southeastern Conference series, LSU captured the final two games of a weekend set after dropping the opener as the fourth-ranked Tigers exploded for 14 runs on 22 hits to roll past No. 9 Ole Miss, 14-6, in the regular season finale at Swayze Field.

The Gators and Tigers did not meet during the regular season. The two foes last met in 2003 when LSU won two and tied another against Florida, March 14-16 at Alex Box Stadium.

The Rebels (39-17, 18-12) finished their regular season tied for second place with LSU in the SEC Western Division. They will begin postseason play as the No. 4 seed against fifth-seeded South Carolina at 5 p.m. Wednesday.

The 22 hits by the Tigers was the second largest output of the season, including a combined eight hits from junior outfielders Ryan Patterson and J.C. Holt.

Patterson tied a career high with four hits and five RBI, going 4-for-6 with a pair of home runs, while Holt raised his average to .402 with a stellar 4-for-5 effort.

Holt’s bunt single led to the first run of the game in LSU’s first at-bat. Patterson followed with a single advancing Holt to third. Matt Liuzza then fanned and catcher Barry Gunther fired down to second but was unable to throw out Patterson, allowing Holt to steal home.

Ole Miss countered with a run in their half of the first, tagging Dirks for three hits to load the bases. Chris Coughlan drew a bases loaded walk — one of two issued by Dirks on the day — to knot the game at 1-1.

Holt manufactured a run again in the second, ripping an RBI single to left that enabled the Tigers to take their second lead of the game as Ivan Naccarata scored.

Dirks labored through the first four innings, falling into his third bases loaded jam in the fourth. Matt Tolbert doubled to leadoff the frame and Gunther followed with a single. Dirks then hit Seth Smith, forcing LSU pitching coach Brady Wiederhold to make the call to Determann.

Determann retired the next two hitters on fly balls but not before allowing the tying run to score on Stephen Head’s sacrifice fly.

The run closed the book on Dirks after 3.1 innings. The Hernando, Miss. native, who grew up about an hour north of Oxford, was charged with two runs on six hits, while fanning two.

The Tigers were unable to collect an extra base hit through the first four innings, scattering six singles before entering the fifth.

Patterson put an end to that by belting his team leading 12th homer of the season off of starter Matt Maloney to break the 2-2 tie.

The homer began an eight-run outburst over the next three innings, including a RBI double by Clay Harris and a run-scoring single by Nick Stavinoha to close out the three-run fifth.

Holt added an RBI single in the sixth, extending the lead to 6-2.

LSU put the game away in the seventh, pushing across four runs — all with two outs — highlighted by Naccarata’s two-run single and singles by Blake Gill and Patterson.

Patterson capped his career day in the ninth, drilling his second homer of the game– a three-run shot estimated at 401 feet — to pad the score at 13-6.

Gill closed out the barrage with his second RBI of the game on his third single through the middle.

Maloney (1-3) suffered the loss as he was charged with five runs on 10 hits.