Tiger Bats Awaken to Even Series Against Ole Miss, 11-4 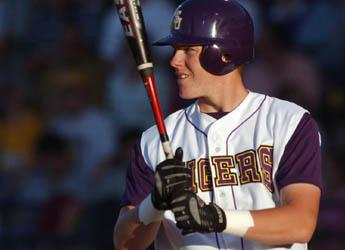 The teams meet in the regular-season finale at 1:30 p.m. Sunday. Freshman left-hander Clay Dirks (8-2) is scheduled to start for LSU, while Ole Miss has yet to name its starting pitcher.

The Tigers still have a chance to claim a share of the SEC Western Division title if they defeat Ole Miss Sunday and Arkansas loses two games to Auburn this weekend in Fayetteville.

LSU will attempt on Sunday to win a league series for the sixth time after losing the opening game. Ole Miss posted a 7-6 victory in Friday’s series opener.

Harris was 3-for-4 at the plate Saturday with a double and a three-run homer to pace LSU’s 15 hit attack, which included six doubles and two home runs.

The Tigers grabbed a 1-0 lead in the first against Ole Miss starter Anthony Cupps as J.C. opened the game with a single and later scored on a single by Blake Gill.

LSU extended the lead to 2-0 in the second when Nick Stavinoha doubled, moved to third on a sacrifice bunt by Clay Harris and scored on a fielder’s choice grounder by Will Harris.

Ole Miss narrowed the deficit to 2-1 in the second, but the Tigers responded with two runs in the fourth as Will Harris delivered an RBI double and Holt provided a run-scoring single.

Stavinoha made it 5-1 in the fifth with a two-out solo home run, his second of the series and his eighth of the season.

Holt’s RBI double in the sixth increased the lead to 6-1 before the Tigers broke the game open with a three-run seventh against Ole Miss reliever Eric Fowler.

Jon Zeringue singled to lead off the inning and, after Ivan Naccarata flied to center, Stavinoha walked. Matt Liuzza then flied to center before Clay Harris launched Fowler’s two-strike offering beyond the left-center field fence for his seventh homer of the season.

Ole Miss retaliated with three unearned runs against Bumstead in the eighth, as the Rebels benefited from a pair of LSU errors.

Bumstead (9-3), who was relieved by Jordan Faircloth in the eighth, limited Ole Miss to four runs (one earned) on six hits in 7.2 innings with three walks and six strikeouts.

The Tigers added a pair of runs in the ninth against Fowler as Dustin Weaver and Clay Harris each lined an RBI double.

Cupps (3-3) took the loss for the Rebels, as he was charged with six runs (five earned) on eight hits in 5.1 innings with one walk and two strikeouts.

Television Affiliates for Sunday’s game include: