Tigers Come Back to Defeat Baylor 7-3, Await Opponent for Sunday 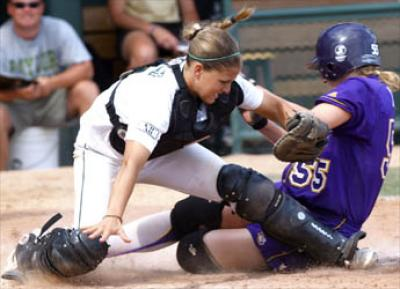 WACO, Texas — It took extra innings before the top-seeded LSU softball team erupted for four runs in the top of the 10th to defeat No. 3 seed Baylor, 7-3, on Saturday afternoon and advance directly to the NCAA Regional championship game on Sunday at 2 p.m.

Moving to 3-0 in regional play for the second time in school history, the Tigers improved to 53-10 on the season. LSU’s other 3-0 start in regional play was in 2001, as the Tigers defeated Cornell, Penn State and Arizona State on their way to the program’s only Women’s College World Series appearance.

In front of a largely Baylor crowd of 905, the Bears (48-16) jumped out to a three-run lead after two innings and seemed to take the early momentum. LSU stormed back with three runs in the top of the third to tie it up. The game remained knotted until the top of the 10th inning. The Tigers then broke the game open with four runs on three hits before retiring the Bears in order in the bottom of the inning for the win.

“We were hoping hat the Alabama win at their place against a huge crowd would prepare us for this game and I think it did,” said LSU head coach Yvette Girouard. “It was a battle the entire way and I want to take my hat off to Baylor. This was a great atmosphere for softball.”

“We’ve had some kids that have been struggling and we keep telling them that their time will come when they have to step up and I think some of them did that today. At the beginning of the game, all the breaks seemed to go Baylor’s way. They made all the plays they had to make. Finally, towards the end of the game the ball found eyes.”

Kristin Schmidt threw her 36th complete game of the season to earn the win and improve to 34-5 on the year and 3-0 in regional play. The All-American from Houston allowed three runs, two earned, on 11 hits while striking out 12, her 12th double-figure strikeout performance of the season.

“What can I possibly say about Kristin that I have not already said,” Girouard commented. “She made every pitch she needed to make and battled through the entire game.”

Baylor got on the board in the bottom of the first inning. With one out, the Bears got back-to-back bunt singles by Carrie Leerberg and Kelly Osburn. On a double steal attempt, the throw from Danos got away from Delahoussaye and into left field, allowing Leerberg to score and Osburn to move to third. Schmidt then got a strikeout and a pop out to end the inning.

In the bottom of the second, Baylor added two more. Kim Wilmoth led off with an infield single. With one out, April Luce homered to left field, the first home run of the regional, to give the Bears the 3-0 lead.

“This is a Glenn Moore team and their style of play is to run and play small ball,” said Girouard. “They stole third against us and we threw the ball away. Leigh Ann had been great for us the last month before today, but they put pressure on us and we made some mistakes. They had everything going for them early but we took the momentum back.”

The Tigers answered back as they have done all season long. In the top of the third, Camille Harris nailed her seventh home run of the season to put LSU on the board. The second triple of the tournament by Leslie Klein scored two more and tied the game.

In the fourth inning, the Bears brought in Lisa Ferguson to replace Cristin Vitek in the circle. Ferguson held the Tigers hitless for five and a third innings before LSU broke through with a single in the ninth.

The Tigers finally found their strike against Ferguson in the 10th inning as Lauren Castle led off with a double. After Baylor intentionally walked Klein, a single by Leigh Ann Danos loaded the bases. Stephanie Hill then hit a ground ball in the hole at shortstop that was fielded and thrown home for a play at the plate.

Castle slid in hard and broke up the play, scoring the go-ahead run, and knocking the ball loose to allow Klein to score. A wild pitch brought Uhle, pinch running for Danos, home before a single by Lauren Delahoussaye scored Hill.

After allowing three runs in the first two innings, Schmidt was outstanding, throwing seven shutout innings to close out the game. Only three runners reached scoring position and no batter advanced to third after she allowed the two-run home run in the bottom of the second, the first home run she allowed in 88 innings.

The Tigers evened their record to 10-10 this season when the opponent scored first and remain perfect at 33-0 when scoring more than five runs. LSU also moves to 4-1 this year in extra inning games and are 3-0 in 10-inning games.

LSU needs just one win to advance to Oklahoma City, while LSU’s opponent will have to defeat the Tigers twice on Sunday to keep them from advancing.