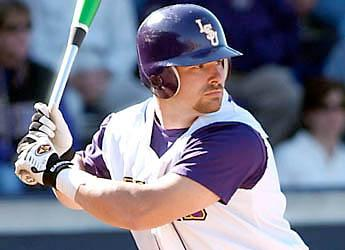 Oxford, Miss. — Charlie Babineaux’s three-run homer in the eighth broke a 4-4 tie Friday night and right-hander Mark Holliman pitched a complete game to lead ninth-ranked Ole Miss to a 7-6 win over No. 4 LSU at Swayze Field.

With the game deadlocked at 4-4 entering the bottom of the eighth inning, Ole Miss’ Stephen Head led off with a single against LSU starter Lane Mestepey. Head was retired at second base when Brian Pettway grounded into a fielder’s choice, but Chris Coghlan recorded an infield single to give the Rebels runnners at first and second with one out.

Babineaux then launched a Mestepey pitch just beyond the center-field wall for his 13th homer of the year.

The Tigers rallied in the ninth against Holliman, as Ivan Naccarata drew a one-out walk and, after Matt Liuzza struck out, Will Harris lined a single to left field.

Holliman fired a wild pitch to advance the runners to second and third before J.C. Holt delivered a two-run single to narrow the Ole Miss lead to 7-6.

Holliman, however, got Ryan Patterson to fly to center field to end the game.

Holliman (9-2) surrendered six runs on 12 hits with three walks and four strikeouts in recording his third complete game of the year.

Mestepey (5-2), who recorded his first complete game this season, was charged with seven runs — six earned — on 10 hits in eight innings with one walk and a season-high five strikeouts.

LSU opened the scoring in the first inning when Patterson unloaded a one-out solo homer, and the Tigers stretched the lead to 2-0 in the second on Liuzza’s RBI single.

The Rebels scored a run in the second on a Liuzza passed ball before erupting for three runs in the fifth to take a 4-2 lead. Cooper Osteen provided an RBI double, Seth Smith contributed an RBI grounder, and Head lined a run-scoring single to highlight the rally.

LSU designated hitter Nick Stavinoha narrowed the deficit to 4-3 with a one-out, solo homer in the seventh, and the Tigers knotted the game in the eighth when Smith misplayed Jon Zeringue’s blooper in right field, allowing Patterson — who had doubled with one out — to score the tying run.