Track and Field Adds Seven Signees to Class of 2004 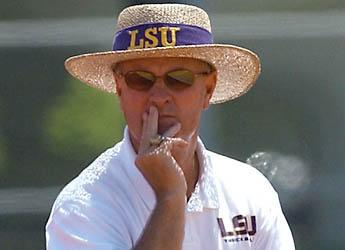 The three men and four women that have signed national letters of intent join seven others that signed with the Tigers in November. All are expected to compete for LSU during the 2004-2005 season.

“I am pleased with the young people that we have been able to bring into the program,” said Henry. “We added some young freshman talent from around the country, but I am also happy that we were able to get some of the better athletes out of the state of Louisiana.”

Headlining the list of in-state signees is sprinter Reginald Dardar of Cecilia. The Cecilia High School product runs both the 200 and 400 meters and owns PRs of 22.23 and 48.36 in the events, respectively.

Also joining the Tiger squad will be local product Ryan Fontenot of Baton Rouge High School. A hurdle specialist, Fontenot comes to LSU with personal-best times of 7.53 in the 55-meter hurdles and 14.01 in the 110-meter hurdles.

On the women’s side, Nedra Gross and Lindsay Day each hail from the state of Louisiana. Gross, a native of Prairieville, will be a triple threat in the field events, after competing in long jump, triple jump and high jump for Dutchtown High School.

Reyes, a native of Defreestyville, N.Y., comes to Baton Rouge as the top-ranked high school long jumper in the country. Reyes owns a personal-best distance of 24-6 in the event, in addition to a top time of 6.50 in the 55-meter dash.

Griggs, who signed with the Lady Tigers out of Southfield-Lathup High School in Southfield, Mich., will run the hurdles for LSU next fall. Griggs has PRs of 8.57 in the 60 hurdles and 14.04 in the 100 hurdles. She has also posted a top time of 24.20 in the 200 meters.

Harmata, who hails from Hazlet, N.J., will bolster the Lady Tigers’ roster in the throwing events. A javelin thrower at Raritan High School, Harmata comes to LSU with a personal-best distance of 151-1 in the event.