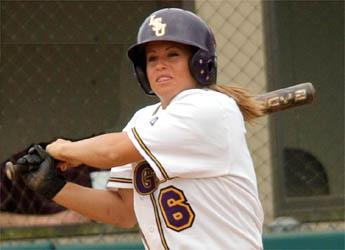 WACO, Texas — A pair of RBI extra-base hits by Leslie Klein led the top-seeded LSU softball team to a 4-0 win over No. 8 seed Texas A&M-Corpus Christi in the first round of the NCAA Tournament on Thursday night at Getterman Stadium.

With their seventh consecutive victory in the NCAA regional first round, the Tigers improved to 51-10 on the season. The loss by the Islanders snapped a national best 18-game winning streak and dropped TAMCC to 39-20 on the year.

LSU will now advance to take on fourth-seeded Seton Hall on Friday at 3 p.m. The Pirates were 4-2 winners over Houston on Thursday in their opening round game. Texas A&M- Corpus Christi will face elimination against Houston on Friday at 10 a.m.

In the third inning, Lauren Castle got the Tigers on the board first with an RBI single that scored Camille Harris from third. Leslie Klein then tripled to score Castle. In the fifth inning, LaDonia Hughes scored on a three-base throwing error by the Islander second baseman Erica Armenta. Klein then came up with her second RBI of the game, on a double that scored Castle from first.

Kristin Schmidt earned the victory for LSU to improve to 32-5 on the season. With her 13th complete-game shutout of the season, she allowed just three infield singles while striking out nine.

Averaging over 11 strikeouts a game, the nation’s fourth-leading strikeout pitcher, Sarah Pauly, was held to just six strikeouts against LSU in the loss, falling to 27-9 on the year. In the complete-game effort, she allowed four runs, three earned, on four hits with a walk.

“I was concerned about this game,” said LSU head coach Yvette Girouard. “I have a lot of respect for Sarah Pauly. She is a legitimate pitcher, but once our lineup adjusted, I think we were fine. Speed kills and we asserted pressure on them with our short game and bunched our hits together. It was a difficult game like we expected and we had our hands full, but we were opportunistic and got our hits when we needed them.”

The Tigers got on the board first in the bottom of the third inning. With one out, Harris reached on a bunt single, LSU’s first hit of the game. She stole second and moved to third on an infield ground out by Hughes. A single to right center by Castle scored Harris from third for the first run of the game. Klein then tripled to left field, scoring Castle from first to give the Tigers the 2-0 advantage.

In the bottom of the fifth, LSU added another pair of runs. With one out, Hughes reached on a throwing error by the second baseman. On the play, she came all the way around to score as the ball sailed into the right field corner. Castle then drew a walk. A double to left center by Klein scored Castle from first before Klein was thrown out at third on the play. The run by Castle counted and the Tigers led 4-0.

After allowing an infield single to the leadoff batter in the first inning, Schmidt did not allow another hit until the fifth. Texas A&M-Corpus Christi then got back-to-back singles on a pair of bunts with one out before Schmidt retired the final eight batters of the game, three by strikeout.